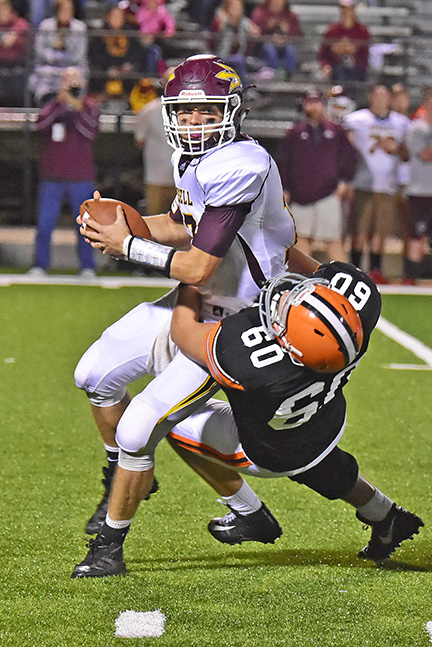 When Ironton head coach Mark Vass puts his team roster next to his injured roster, it’s about the same length.
Ironton was missing six two-way starters last week and two more during a 38-20 loss at Gallipolis. That total doesn’t include the loss of Charlie Large in game one and Jordan Grizzle against Chesapeake.
Despite the “Who’s Who” regarding the starting lineup this week, Vass said the Fighting Tigers will go with the “next man up” attitude as they host the rival Portsmouth Trojans on Friday..
“It gets crazy trying to figure out who can play and where, but you just have to adjust and go on,” said Vass. “We will still prepare to win and we’re hoping our seniors can go out with a win.”
Both teams enter Friday’s Ohio Valley Conference game 4-5 overall and 3-3 in the league.
Ironton and Portsmouth have played more games against each other than any other schools in Ohio high school history. Ironton leads the series 59-55-8.
Portsmouth has had a few injuries but the most notable is the loss of sophomore running back Talyn Parker (5-10, 180) who was injured in the season opener and missed four games.
But Parker — a 1,000-yard rusher last season — is back in form and teams with senior quarterback Isaac Kelly (6-3, 200) to give the Trojans two key weapons.
Both are good runners and Kelly has proved to be a good passer. His main targets are senior split ends Daniel Jordan (6-2, 170) and Logan Carter (6-2, 170) and senior flanker Deante Parker (5-9, 170) who is the older brother of Talyn Parker.
The tight end is junior Parker Johnson (6-2, 240). Senior D.J. Pearsall (6-0, 215) is the fullback.
Portsmouth has a veteran offensive line that includes senior Anthony Ferrara (6-2, 270) at center, juniors Bryson Morrow (5-11, 190) and Austin McKenzie (5-8, 215) at the guards, and seniors Jaden Josey (6-0, 235) and Ryan Sutherland (5-9, 270) at the tackles.
“Everyone is aware of Parker’s ability to break the big play at any time, but their quarterback is a good athlete and he makes plays,” said Vass.
“They have a lot of experience up front and they have speed on the outside. They have a very explosive offense.”
With so many players missing, Ironton’s offense will again rely on quarterback Gage Salyers, running back Garrett Carrico and receiver Reid Carrico.
Vass said Portsmouth’s defense is a solid group that bends but doesn’t break.
“They’re pretty sound fundamentally. They do the right things and make plays when they need to. We’ll have our hands full,” said Vass.
The Trojans have senior Gabe Gambill (6-5, 275) and McKenzie at the tackles with senior Zach Kinney (5-11, 205) and Ferrara the ends.
The inside linebackers are Josey and sophomore Tyler McCoy (5-8, 155) with Kelly and Pearsall on the outside.
The speedy secondary has Deante Parker and Jordan the corners with junior Danny Lattimore (5-11, 170) the free safety.
Kickoff is 7 p.m.