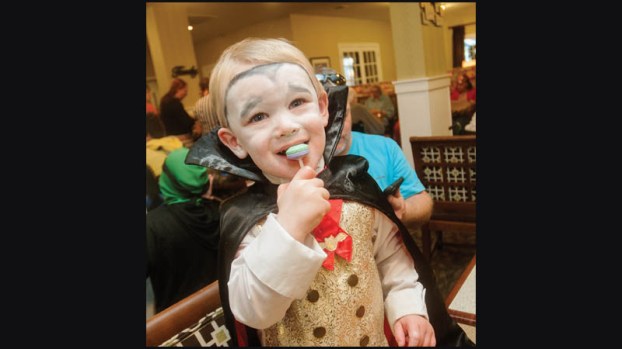 Two-year-old Colt Adams enjoys a sucker after trick or treating with residents at the Wyngate at RiversEdge facility Thursday in Proctorville.

ROME TOWNSHIP — The Wyngate at RiversEdge hosted its annual safe Trick or Treat on Thursday.

Children went door-to-door and received candy from the residents at the senior living community, while awards were given to the best costumes.

Colt Adams won for scariest as Dracula, while Addison Miller’s Dorothy from “The Wizard of Oz” was named most creative and Toni Catalonga was named prettiest for her butterfly costume.

Afterward, the children were treated to a magic show from a local performer.

Thursday’s event was free and open to the public, and is one of many the Wyngate hosts, activities director Julie Poff said.

“It was our biggest yet,” she said. “We’re all about community and we like to invite the public in and show off the facility.”

The Wyngate’s next event is a Winter Bazaar, set for Saturday, Nov. 18, from 10 a.m.-2 p.m. and will give shoppers the opportunity to purchase from local vendors.

Poff said there is no cost for vendors to set up a table and a boxed lunch will provided.

For more trick or treat pictures, see Focus on C1.