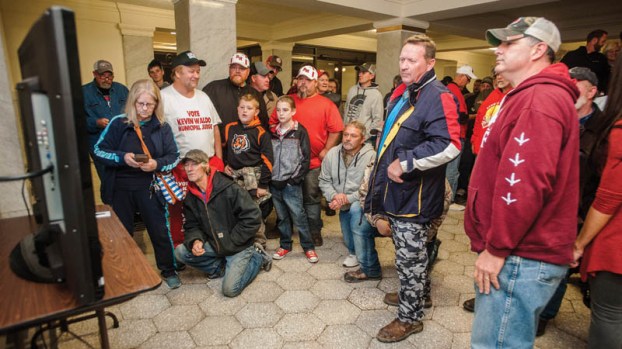 Many area residents gather inside the lobby of the Lawrence County Courthouse as they watch for results in the General Election 2017 Tuesday evening.

A number of village council and trustee positions were on Tuesday’s general election ballot.

In Chesapeake, all candidates were unopposed for three seats. Incumbents Richard McMaster and Richard Stover were re-elected, while Bill Duncan, was appointed to fill a vacancy last year, was elected to a full term.

Newcomer Danny Burd will be joining them on council, filling the position vacated by longtime incumbent Paul Hart, who failed to qualify for the ballot due to an incomplete petition submission.

In Hanging Rock, incumbents Timothy Dickens and David Hopper were re-elected. John K Wagginger, will join them on council. All three were unopposed.

“I am excited,” Cogan, who was at the courthouse as results came in, said. “I’m happy that the voters had confidence in me.”

They will be joined on council by Marlene Arthur and Bill Patrick. Incumbent David Moore was defeated in his bid for re-election.

In Proctorville, the results for the four seats up were tight, with a chance that uncounted provisional ballots will likely change things.

Pam Legg was running in first, followed by Jerry Thompson.

Margie Whitley, a newcomer who has been a fixture at council meetings, was tied for third place with incumbent Brenda Chapman. The two had 66 votes each in preliminary results.

They were followed by Lisa Nutter in fifth, who had only one less vote.

Whitley said she was excited and hopeful by the early results.

“I want to get something done,” she said. “And I hope everybody can get on board.”

In Coal Grove, incumbents Shawn McDaniel and Kimberly McKnight were re-elected. Joining them on council will be Jay Sherman and Diana Wise.