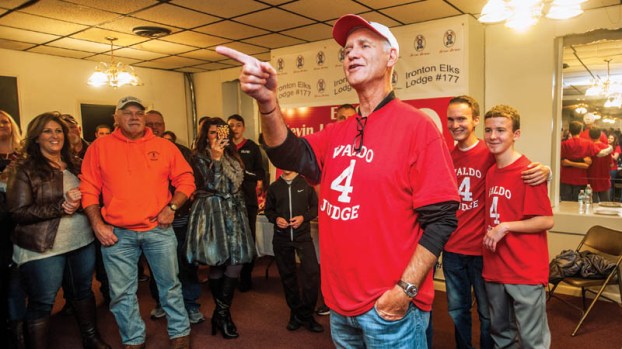 In one of the closest races of the night, Kevin Waldo defeated Mark McCown by 41 votes for the seat of Ironton Municipal Court judge.

“It feels great,” Waldo said of his victory. “I put my heart and soul into this campaign, and all of my supporters did the same.”

Waldo maintained a lead all evening, but the race remained close as results continued to roll into the courthouse.

Waldo said he is extremely proud of his family for supporting him throughout his campaign, as well as all of his other supporters, who he added are like family.

“It was a family thing. When you get in something this big, my wife and my kids were very involved, and all of my other supporters have been great. It just takes an unbelievable effort,” he said.

The use of social media was another aspect of the campaign that Waldo said made a big difference.

“Social media played an enormous role,” he said. “That’s the biggest difference between campaigns now and how they used to be.”

Some of the things that Waldo said he plans to do in the Ironton Municipal Court include bringing in a certified drug court, and making the court more transparent through the use of technology.

“We need to help people who are addicted to drugs and committing crimes,” he said. “And we need to make the court more transparent with the Internet and letting people know all of the cases and the statuses of the cases.”

He also added that although he was very happy to win, his opponent, Mark McCown, ran an impressive campaign.

“Mark McCown did a phenomenal job. He ran a great campaign,” he said. “It’s just amazing that I was able to pull this out.”

McCown said that although he lost this race, he was also very proud of his campaign and his efforts.

“Obviously it was a great campaign on both sides,” McCown said. “Whenever you have a judicial race that comes within 41 votes, that’s pretty impressive. Kevin ran a great campaign, obviously, and I congratulate him on being the victor.”

Through the campaign up until the final results, Waldo continued to say good things about his supporters.

“I can’t stress how much I appreciate all of the help I got from so many different people,” he said. “I feel embedded to everyone who worked as hard as they could to help me, and it’s a very humbling experience.”

Investing for the future