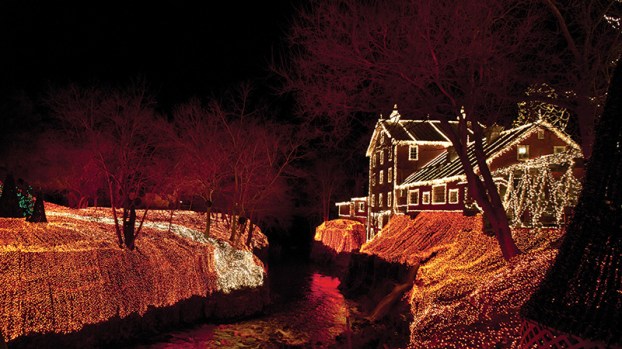 An acre of light

Every year, Clifton Mill is covered by 4 million Christmas lights for a dazzling display

In Clifton, Ohio, there is an old gristmill that every year turns into a Christmas wonderland with some millions of lights covering every surface. The place is a restaurant that serves breakfast and lunch during the week and dinners on the weekend.

Located 40 miles southwest of Columbus, the mill was begun in 1802 by a Revolutionary War soldier, General Benjamin Whiteman, who served under George Washington. It was built on the Little Miami River to use the river’s water to power the mill.

In 1987, Anthony Satariano and his dad, also named Anthony Satariano, bought the mill. They both worked in the fragrance industry. The elder Satariano was retiring after being a national vice president of a fragrance company. The younger Satariano was the Midwest regional manager for a fragrance company who wanted to get off the road and spend more time at home after starting a family. They found out the mill was available and thought it would be a great place for a restaurant.

“My father always had a fascination with old mills, we bought it because we didn’t want to work for other people forever. ” Satariano said. “Something like this is very unique, very historical. It allows us to do whatever we want in a really neat environment in a really great building that sits on a gorgeous river.”

The massive light display had a rather humble beginning.

“Once my father and I bought the place, he was very, very much into Christmas,” Satariano said. “He said we have this neat building, let’s throw some lights on it for ourselves.”

The first year was just a simpler display of 100,000 lights but it attracted attention. People started coming by and thought it was really neat.

“It was an ‘a-ha’ moment,” Satariano said. “People were thanking us for doing this and there has been no looking back. It just kept getting bigger and bigger ever since.”

Now, Clifton Mill, a covered bridge, the banks leading to the Miami River and even the mill wheel is covered in some 4 million lights. That comes out to about seven miles in just extension cords to keep the whole thing powered.

“Since we’ve been doing this for 30 years, It has become a something a family tradition,” Satariano said. “People come up to me and tell me that they came to see the lights as a kids and now they are bringing their own kids.”

The display includes a light show on the covered bridge, a miniature animated village, a live Santa in his workshop, and a collection of over 35,000 antique Santa Claus dolls.

“It just really grew over the decades,” Satariano said.

Satariano said that when they started out, they didn’t know that much about doing a big Christmas light display.

“It was pretty comical, we literally didn’t know what we were doing,” Satariano said. “I started blowing fuses and breakers because I didn’t understand anything about electricity. I thought I could just keep plugging the lights in forever. You can’t.”

Now, they have professionally installed panels to control everything.

Satariano starts putting up the lights in August and doesn’t finish until just before the display starts the day after Thanksgiving.

“It takes a lot of work,” he said. “Most days, I’m outside. Either on a roof or cliff somewhere putting up lights.”

Even though the gristmill is over 200 years old, it still works.

“Even today, I can turn it on,” Satariano said. “A grist mill primarily grinds corn or wheat products. I can still grind either of those if someone asks me too.”

The display starts the day starts on Nov. 24 is open every night until Dec. 31. The cost to get in is $10 for every person over the age of 7. Parking is free. For more information, go to cliftonmill.com.

Clifton Mill is located at 75 Water Street in Clifton, Ohio.