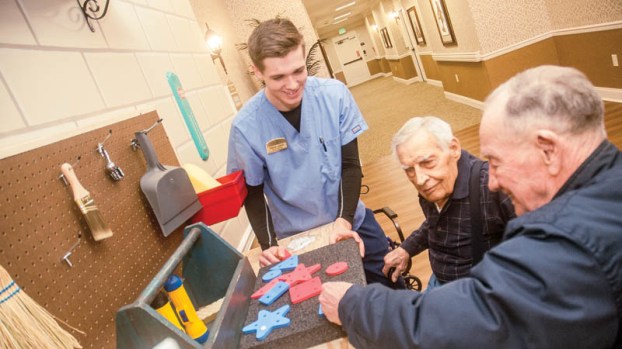 The Lantern opens, offering home to those with Alzheimer’s

RUSSELL — An open house took place on Thursday for The Lantern at Morning Pointe in Russell.

The 33,000 square foot facility is home to 50 apartments for those with memory-related conditions, such as Alzheimer’s disease and Lewy Body Dementia.

Groundbreaking on the building began in summer 2016, and the first residents moved into their quarters in early September.

Thursday’s event, which featured local officals and dignitaries, was kicked off by a performance of the national anthem from the Singing Colonels of Ashland, and was designed to show off the center to the public.

About half of the center’s residents came from the Morning Pointe facility next door, Aaron Gustin, director of nursing for The Lantern, said.

He said those staying at the facility take part in activities designed to help with memory skills.

“There are activities planned throughout the day, from when they get out of bed, to when they go to sleep,” he said.

Gustin pointed to a number of memory skills stations set up throughout the building, which he said have interactive features for residents. One includes musical instruments and staff and volunteers regularly use them with residents. Each station also has an interactive computer for memory skills.

“All of these come off the walls,” he said of the guitars and other items hanging.

Throughout the open house, residents were taking part in activities, such as candy making, part of the facility’s activity programming, which can also include Gospel concerts and pet therapy.

Gustin said the apartments, which include a bedroom and bathroom, can be either furnished, but most families choose to provide familiar items, such as their own beds for residents.

He said most residents live independently, but The Lantern also takes married couples.

“In that case, they would share a room,” he said.

On the door of each room is a “memory box,” a translucent container containing items related to resident’s life, such as old photos.

One resident, who worked in construction, had toy bulldozers and other equipment in his memory box.

Gustin said, while those with Alzheimer’s may no longer be able to read their name, they still recognize such items and the boxes help residents to find their rooms.

“They see these items, which are familiar to them,” he said.

The building features three wings of apartments and several activity areas, including the main commons, a large dining hall situated at the building’s center, which features a piano.

Gustin said a volunteer regularly comes to play for residents and that church services take place in the area.

Wanda Parker, the senior executive director for The Lantern, said the facility has 30 residents and has room to take on 14 more.

The staff includes 35 people and she said 20 more are expected to join coming months.

Cheryl Stephens, executive director for the facility, comes from a background in nursing management and King’s Daughters outpatient surgery program.

She said things have been going well since the opening.

“The transition for our residents has gone smoothly,” she said. “We anticipated some bumps, but haven’t had many and are pleased.

She described the facility’s mission as “an Alzheimer’s Center of Excellence.”

“We allow our residents to age in place, with dignity,” she said. “We offer life skills activities, based on a person’s life experience and we a re a secure and safe facility.”

Wyngate at the RiversEdge recognizes veterans Despite the freezing temperatures on Friday, veterans and others gathered around the flag outside... read more