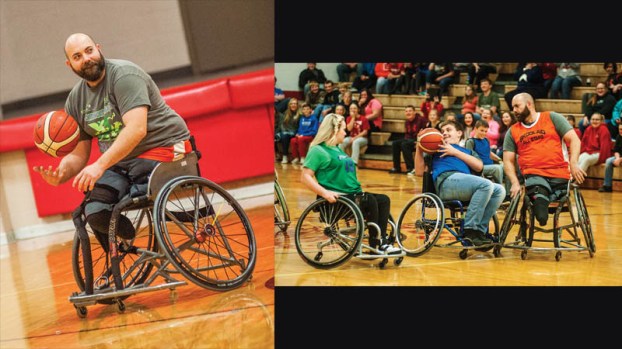 The Disability Awareness Presentation was conducted by Skool Aid, a program founded in 2011 by northern Kentucky native Ian Smith that has a mission of enriching children’s lives of Greater Cincinnati and northern Kentucky through quality after-school, during school or summer programs.

It serves both public and private schools, as well as other children’s organizations, by bringing together passionate, talented instructors with a variety of backgrounds, providing a wide range of enrichment programming in music, fitness, creative arts, drama, disability awareness and more.

For the assembly on Thursday, Skool Aid teamed up with the Greater Cincinnati Adaptive Sports Club (GCASC) for the Disability Awareness Presentation. The GCASC is a 501c3 non-profit organization with the mission to promote adapted sports for children and adults who have a disability in the greater Cincinnati area. The Cincinnati Dragons are the flagship program of the GCASC, bringing wheelchair basketball to youth in and around the Cincinnati area.

“It is an honor to have Skool Aid visit our middle school,” Rock Hill Middle School Principal Jason Owens said. “Each day we strive to instill the philosophy that all students have a role in the Redmen community.”

Counts grew up in Covington, Kentucky and the Cincinnati area before attending the University of Wisconsin-Whitewater, where he was a member of the men’s wheelchair basketball team and earned a B.S. in recreation and human resources.

From 2007-2010, Counts was also a member of the USA National Wheelchair Basketball Team, and competed in the 2008 Paralympic Games in Beijing, China. While coaching at Alabama and playing internationally, Counts has accumulated more than 15 years of experience working with children in recreation, therapeutic recreation and wheelchair athletics, and said he has a passion for promoting physical fitness and athletics for children of all abilities.

Counts talked to the children about how he became disabled, and said when he was a 13-year-old in seventh grade, he made a poor decision of trying to jump onto a moving train and getting caught underneath. He added that although he lost his legs as a result of the accident, he was glad he was able to keep his life with the help of others at the scene, and help others along the way ever since.

Some of the students then got to test their skills by competing in a wheelchair basketball game with Counts and Smith.

Principal Owens said the presentation was great for the students at the school, in that the school is always pushing for adversity, promoting differences and uplifting others.

“Life has daily obstacles that we must overcome,” he said. “So working together and uplifting one another strengthens each individual student and promotes a culture that can enhance success.”

“The awareness and enrichment that the presentation provided is definitely what we’re seeking for the betterment of our students here at Rock Hill.”

The Festival of Trees and Trains kicks off the holiday season at the Paramount Arts Center in Ashland. The event... read more