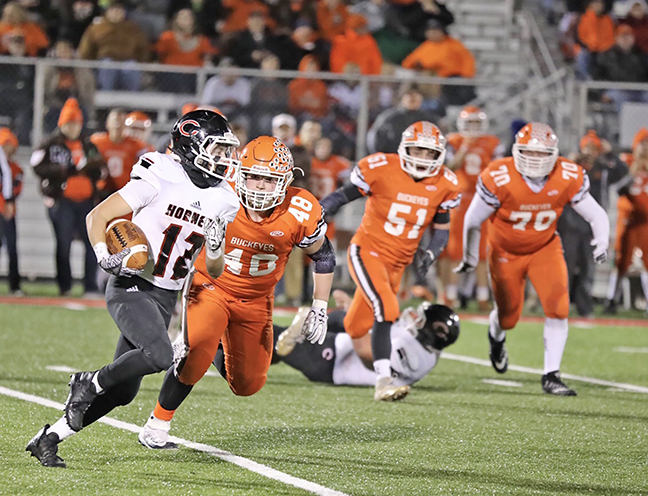 Coal Grove Hornets junior tailback Kyle Sites (12) takes off around the Nelsonville-York defense on his way to a 67-yard touchdown run in the first quarter of Friday’s Division VI Region 23 championship game. Sites ran for 201 yards but the Hornets fell 28-7. (Photo Courtesy of Tim Gearhart)

JACKSON — The end didn’t seem to fit the season.

The Nelsonville-York Buckeyes relied on their big-play duo of running back Keegan Wilburn and quarterback Garrett Maiden to beat the Coal Grove Hornets 28-7 in the Division VI Region 23 championship on Friday.

The Hornets remarkable season seemed to end too early for what they had accomplished. They finished 11-2 and an Ohio Valley Conference championship. It was their first playoff appearance since 2012 and first regional title game since 1990 when they advanced to one of their two state semifinal appearances.

“You never want to go out on a loss, but we had a great season this year. We overcame a lot this year to do what we did. I’m proud of our guys’ effort that they gave all season. We just came up a little bit short,” said Hornets’ coach Evan Ferguson.

“Nelsonville-York just outplayed us tonight. Plain and simple. They deserved it.”

Nelsonville-York (13-0) will now play next Friday. in the state semifinals against Kirkland at a site to be determined.

The Hornets had a solid running game with 260 yards as Kyle Sites ran 22 times for 201 yards and a touchdown.

However, the Hornets had just 19 yards passing.

Nelsonville-York ran for 153 yards and Maiden was 14-of-19 passing for 224 yards and an interception. Maiden also ran 19 times for 80 yards.

Wilburn rush 11 times for 74 yards and caught nine passes for 131 yards. He ran for two scores and had one TD catch.

Coal Grove opened the game with a drive to the Buckeyes’ 18 only to have Shakim Williams come up with an interception.

After an exchange of punts, the Buckeyes went 88 yards in just six plays with Maiden hitting Wilburn with a 22-yad touchdown pass. Maiden’s conversion kick made it 7-0 with 1:48 on the clock.

But the Hornets answered before you could blink an eye as Sites bolted 67 yards for a touchdown on the first play following the kickoff. Evan Holmes’ conversion kick tied the game with 1:29 left in the first quarter.

Nelsonville-York got to the Hornets’ 29 early in the second quarter but Sam Angelo came up with a leaping interception to halt the threat.

Coal Grove then gambled on fourth down and less than a yard at their own 35 but failed to convert.

The teams traded fumbles and then the Hornets got to the Buckeyes’ 29 before turning the ball over on downs.

Wilburn ran for 12 and 5 yards to the 46 and then Lady Luck played a hand in the next play.

Maiden threw a pass downfield to Shakim Williams that was batted in the air by two Coal Grove defenders. However, Williams was able to catch the deflection and turn the reception into a 54-yard touchdown pass.

Maiden’s kick put the lead at 21-7 with just five seconds on the clock.

“It was a multitude of things tonight, not just one play right before the half. The ball didn’t bounce our way much. Sometimes when the ball did bounce our way, we weren’t able to capitalize,” said Ferguson.

The teams exchanged punts to begin the second half and Nelsonville-York had the ball back on its own 12-yard line.

The Buckeyes marched the length of the field in 15 plays to score using a 48-yard catch-and-run by Wilburn to key the drive and converting 5-of-5 third down conversions.

Wilburn went the final yard for the touchdown and it was 28-7 with 46 seconds on the clock.

“That drive was a nail in the coffin. They had three over 10-yard third-down conversions. They took almost eight minutes off the clock. At that point, we saw the wind get sucked out of our kids. We tried to hang in there, but we just came up short tonight,” said Ferguson.

The Buckeyes recovered a fumble and got to the Coal Grove 4-yard line but the Hornets’ defense stiffened and blocked a 21-yard field goal attempt.

The Hornets then drove to the 19 only to be intercepted in the end zone.

However, a late hit on the quarterback gave the Hornets new life with a first down at the 10. But the Hornets turned the ball over on downs due to a pair of sacks for minus 20 yards.

Coal Grove recovered a fumble on the next play at the 26 but again couldn’t take advantage of the opportunity and gave the ball back with under a minute to play.