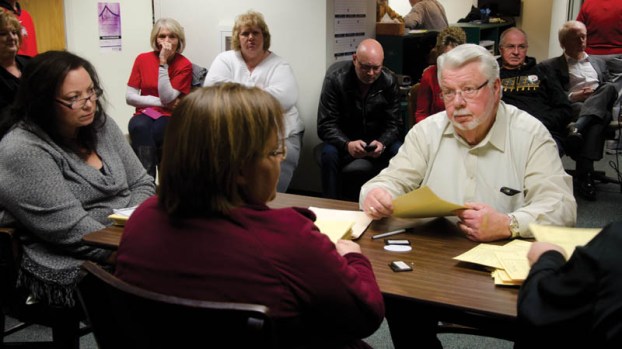 Members of the Lawrence County Election Board review provisional ballots on Sunday for the official canvas of the 2017 general election.

No change in Ironton court race

Board of Election did official count on Sunday

The official canvass  of the 2017 general election in Lawrence County is in and there was no change in the winner of Ironton’s municipal judge race.

The 0.72 percent margin of victory was high enough to not trigger a recount of the race, board director Cathy Snyder said.

A recount is necessary if the margin is less than half a percent.

Waldo had led McCown by 41 votes in on election night, before remaining absentee and provisional were tabulated. His margin increased by eight votes in the official canvass.

“Election night is always unofficial,” Snyder said. “That is key.”

In another close race, the local option to allow sales of alcohol at Sam’s Club in Burlington was defeated by one vote. The results had been tied on election night.

The Proctorville council race, which also had been close on election night, remained unchanged.

Of the five candidates running, four were elected, including Pam Legg at 83 votes, Jerry Thompson at 70, and Brenda Chapman and Margie Whitley tied at 66 votes. Also running was Lisa Nutter, who received 65 votes.

Members of the board, which is comprised of three Republicans and three Democrats, met Sunday afternoon to conduct the final canvass.

First, the board reviewed absentee votes, which had been received after election day, but had been postmarked earlier and were still eligible to be counted. These were approved.

A separate stack of absentees had been marked as rejected, due to factors such as no identification included, late postmark or no postmark.

The board agreed with this decision.

Once approved absentee ballots were sent to be scanned and counted, the board went through provisional ballots, first looking at a large amount that had already been reviewed as eligible.

After about 45 minutes of review, the board approved the ballots.

The smaller stacks were put forward for review. The first was for voters who were in the right precinct, but voted at the wrong location.

Next, the board went over provisional ballots that had been turned down, agreeing with the earlier review.

The board then voted to reject provisional ballots that had the wrong precinct and location, had no identification, had no signature and had no birthdate or address.

With these decided on, the provisional ballots were then sent to be scanned and counted and results were announced to the crowd of about 30 people waiting in the office.

McCown was among those present, as were a number of Waldo’s supporters, who said their candidate was on the road during Sunday’s count.

There was no contention in any of the review and all decisions during the canvass meeting on Sunday were unanimous.