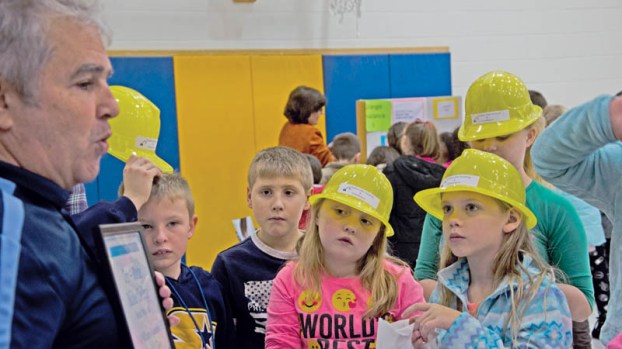 Ted Williams from Tri-State Bible College speaks with South Point Elementary students during the first career day at the school on Tuesday.

A look at the future

The school hosted a career fair in its gymnasium and several individuals from the Tri-State told third through fifth graders about what they do for a living.

Joe Hamden of Marshall University’s biology department had a bearded dragon crawling around the table at his booth and had the skulls of several animals, such as a white-tailed deer, coyote and alligator, on hand.

He also showed the children a replica of Tyrannosaurus Rex claw.

He said he does several children’s events and teaches them how to make a claw of their own, using plaster.

“We use household items and it’s a nontoxic process,” he said.

Rick Slack, of Slack and Wallace Funeral Home, spoke about his business.

“I’m talking about all the things I do, as far as being the director,” he said. “I stress the importance of math and English skills and do a question period. A lot of kids, unfortunately, have had to do with funerals already at their age and are familiar with them.”

Others speaking to the children were Mary Stephens, of Stephens and Son Insurance, and Dana Smith, of South Point Storage.

Diane Kelley, a third grade teacher at the school, said letters were sent to businesses around the community, inviting them to attend and speak to students.

“They can learn about careers they might be interested in,” she said. “This is our first year and we’re hoping to grow.”

The third annual Christmas Extravaganza, hosted by People for the Point and South Point Schools, is planned for Dec. 9.... read more