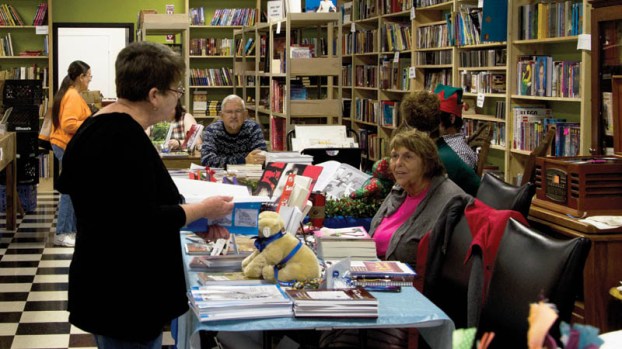 Four local authors set up at Consigned Books in Ironton on Saturday, to help the store mark its one-year anniversary.

Consigned Books in Ironton hosted four local authors, as well as Santa Claus, on Saturday, as part of the one-year anniversary of the store’s opening.

“We made it,” owner Cindy Black said, adding that the store opened at 221 S. Third St. on Black Friday, the first day of the holiday shopping season in 2016.

The celebration, conveniently fell on Small Business Saturday, in which people are encouraged nationwide to shop local and support independent stores.

Along with her son, Heath, and husband, Mark, she offered cake for customers dropping in for the event, as well as a chance to get pictures taken with Santa Claus.

One of the authors doing a signing at the shop for the celebration was Dr. MJ Wixsom, a Flatwoods veterinarian.

“I write books about animals,” she said.

Sitting beside her was Cat Shaffer, who writes about the paranormal, as well as romance and suspense works.

First-time writer R.C. Burch, of Ashland, was offering copies of her children’s book, “The Lost Soldier.”

“It’s about a little toy soldier in a department store who is the last of his kind and goes on adventures,” she said. “It’s a religious children’s book and it’s taught in churches.”

Lori Shaffer, of Ironton, had copies of her first book, “Iron Furnaces of Lawrence County” available, which detailed the history of the industry in the area.

She said she focuses on the local history involved with the stories.

“That way, they get an idea what’s important about the locations,” she said.

Black said the store has several offerings for the holidays, including gift wrapping, gift bags, gourmet chocolate and gourmet coffee from the Old Village Roaster in Huntington.

She said the store will also host another signing at 2 p.m. on Dec. 7, with author Korey Ward.

Consigned Books is open from 10 a.m. – 5 p.m. Monday through Saturday  Black said the store will be open tonight until 7 p.m. to coincide with the crowds downtown for the Ironton Christmas parade at 6 p.m.

A look at the future