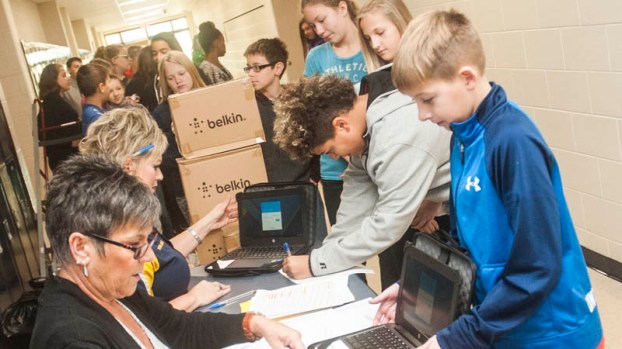 Students from South Point Elementary School line up receive a new Chromebook Monday morning. Students in sixth, seventh and eighth grades are given the Chromebook’s to use through their middle school careers.

SOUTH POINT — South Point Middle School students each received a new piece of equipment on Monday to aid in their education.

The school district handed out 400 Chromebook PC laptops to students, the second phase of a district push to get technology into the schools.

“We gave about 400 at the middle school today,” superintendent Mark Christian said. “About a month ago, we gave out 450 at the high school. Everyone got one to take with them to use as their own.”

Christian said parents will sign a usage policy, in the event a computer is lost or damaged.

He said each has an insurance policy and a warranty for three years, the length of the lease the school has on the computers.

Christian said the district made the decision to get the laptops about two months ago.

“We did research,” Christian said of the benefits, and said the district’s computer technology staffer, Nick Clay, has been “instrumental” in setting things up.

“He has a device manager,” Christian said. “Everything goes through that, to get permissions on what you can or can’t do.”

He said, as a result, the laptops can’t be used for Facebook or personal activities and are reserved solely for educational purposes.

He said all students will have their own school email and will make use of programs such as Blackboard and Google Suite.

He said the high school students have already used the computers for testing, and that they will be used for research and turning papers in. He said school textbooks will also be downloaded electronically, so students always have access to them.

“It’s better than carrying seven to eight big, heavy books home,” he said. “Now, they just have the one thing.”

Christian said the students will have the laptops for their use throughout the school year and they will be turned in each summer. After the lease is up, the district plans to purchase more in three years.

He said this was part of a larger push, which also included replacing teacher workstations and getting 1,194 new computers for the schools.

“We’re making a big commitment to technology this year,” Christian said, noting the cost was about $460,000 for the district.

He said he is thankful the board of education approved the plans.

“They were absolutely in favor of it,” he said.

South Point’s purchase of the laptops follows that of Symmes Valley schools, who also gave out Chromebooks to grades 3-12 earlier this school year.