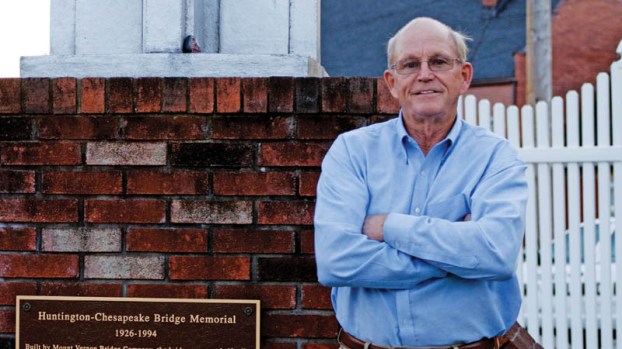 Paul Hart, who has served on Chesapeake’s council for 31 years, attended his last meeting at village hall on Monday.

CHESAPEAKE — In his 31 years on village council, Paul Hart has acquired a reputation for being one of its more outspoken members, with other council members occasionally joking about how much he talks during meetings.

“I don’t mean to be a critic, but sometimes you need a person to shout and holler,” he said.

His wife, Beverly, proudly calls him “an agitator.”

Hart, 75, sums up his approach to 31 years in local government with a lesson he said he learned from a friend and teacher, Harvey Butcher.

Hart attended his final meeting as a member of council on Monday.

He had weighed whether to run again this year and decided to go ahead, but, after being knocked off the fall ballot for an incomplete petition, he was faced with the decision to file an appeal or do a write-in campaign.  He ultimately decided to retire.

“It’s time,” Hart, a lifelong resident of the village, said.

Former Chesapeake Mayor Dick Gilpin, who served with Hart for 9 and a half years at village hall, reflected on his contributions to the village.

“Paul does a lot of stuff nobody hears about,” Gilpin said. “He’s steered us through problem spots and helped us easily solve things. We’re going to miss Paul on council. He’s a wealth of information and a voice for the people of Chesapeake.”

Gilpin said Hart’s dedication to Chesapeake was not limited to government.

“It’s not only that he’s as a councilman, but also, as a businessman, he’s done a lot for this town.”

“It was a shock, being on my own, the first six or seven months,” he said. “But, before I knew it, I had two gas stations, a muffler shop, a convenience store and parts services.”

Hart began to invest in real estate and currently owns land and buildings used by numerous businesses in the county. His tenants employ about 300 people, he said.

Hart has been married to Beverly for 53 years and they have two sons and two granddaughters.

He said the secret to his political success was the support of his family.

He is a member of the Chesapeake-Proctorville-Rome Lions Club and has been active with Elks, the Lawrence County Chamber of Commerce, the VFW and the American Legion.

He said his family has been in the Chesapeake area for more than 100 years and his father, Harry Hart, built several homes, churches and businesses in Chesapeake, even rebuilding the current home of village hall, after it was nearly destroyed in a gas explosion in the 1940s.

“I love this little village,” Hart said of his home, which paid tribute to him for his service at Monday’s meeting of village council.

Mayor Tommy Templeton and council members hosted a celebration at the beginning of the meeting, presenting Hart with a cake and hearing from guests who had come to present him with honors.

Gilpin spoke first, giving Hart a certificate, on behalf of the Lawrence County Economic Development Corporation and the Chamber of Commerce, recognizing him “for 31 years of dedicated, loyal service to Chesapeake.” He also read a letter of congratulations from U.S. Rep. Bill Johnson, R-Ohio.

Gilpin said that Hart, along with the rest of the council, had been a great help when he was mayor, citing paving and road repair projects that were accomplished.

Gilpin was followed by Lawrence County Commission President Bill Pratt, who called Hart “An icon of Chesapeake” and presented him with a certificate, on behalf of the commission, naming him as “an outstanding resident of Lawrence County.”

Templeton thanked Hart for his service, then turned to floor over to him.

“My journey as a council member has been a hoot,” Hart said. “I want to thank all the men and women that I have worked with in the village of Chesapeake. I feel these people had the best interest of the village at heart for business and our daily activities.”

In his farewell speech, he thanked past mayors, council members, police and fire crews, area businesses and local civic organizations.

“I would not trade my time in our village or our life with anyone,” he said. “I have had a wonderful career and been blessed. For this, I thank my God, my family, the citizens of the village, classmates, employees and neighbors who gave me help and support.”