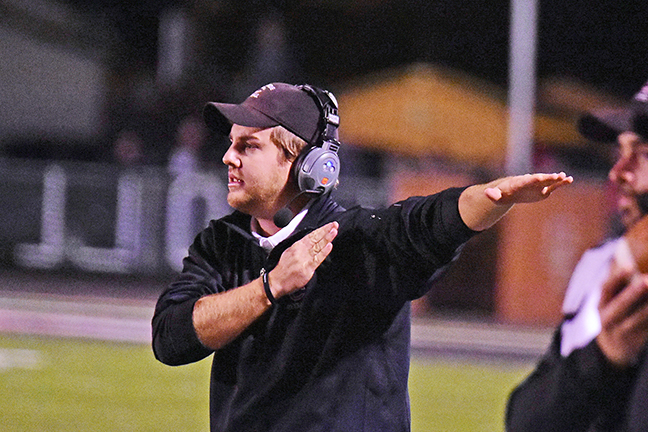 COAL GROVE — Maybe Evan Ferguson just read the Charles Dickens’ classic “Great Expectations” and thought it was inspiring.
And maybe Ferguson just understands what football coaches really think.
Ferguson is just 25 years old and stepped into a Coal Grove program last spring that has been known for its football since it began more than 75 years ago.
Ferguson had been an assistant coach for five years at Wayne, W.Va., that is known for its football tradition, and one season at South Point before being named the Hornets’ head coach.
As the third coach in four seasons, Ferguson was hoping to bring stability to the program where he played and led the team to an Ohio Valley Conference title and playoff berth in 2009.
“Coming, I wanted to be successful but I was also realistic.  I wanted to build a good culture and build a program to be successful for years to come,” said Ferguson.
“Our first goal was to be the best Coal Grove we could be. I didn’t know what this would entail. I didn’t know if that would be 5-5, 8-2 or 10-0. But the kids were all buying in. We just wanted to do it all one step at a time to reach our goals.”
With a senior-laden group, Ferguson was hoping more than expecting for success initially. Still, he couldn’t hide his lofty goals.
“We had talent and we wanted to win the state, but we wanted to focus on ourselves,” said Ferguson. “We went to a 7-on-7 at Huntington High and I saw we could be good. I don’t put a lot into those things, but I felt lot more confident in what we would be. I saw some athletes. I wanted to win conference and make a run in the playoffs.”
What followed was a 9-1 regular season, an Ohio Valley Conference title, a Division VI Region 23 playoff berth and the program’s first-ever home playoff game.
The Hornets beat Shennadoah 7-6 and unbeaten Southeastern 46-22 before falling 28-7 in the regional championship to Nelsonville-York.
“You never know what to expect. When we lost to Portsmouth West (game three) we had some things we were doing and changed them. It kind of exposed what we were doing wrong,” said Ferguson.
“It far exceeded what I expected my first season. After a while, I just felt like I was coaching football. We hit our stride.”
Ferguson was named the OVC Coach of the Year and shared the same award in the Southeast District with Rusty Richards of Nelsonville-York and Evan Gallaugher of Southeastern.
But Ferguson said it was about the players — especially the seniors — than about him.
“It’s good to have young guys who can play, but it’s nothing like having seniors out there who can play. I saw kids grow up through the year. Jeb (Jones), for example, realized how much fun it was to just play some football. You had Darin (Bloomfield), Kimo (Baldwin), Trey (Hicks), Sam (Angelo) and others. It was their last chance to play football,” said Ferguson.
“I don’t want a sophomore who thinks I have next year. I want seniors who know they’ll never put a uniform on again. Even when got beat we handled ourselves with class. I was proud of that.”
The Hornets lose 13 seniors. The main returning players will be Nate Harmon, Kyle Sites, Aaron Music, Evan Holmes, Austin Stormes, Reece York and Ben Compliment.
“We return Nate, Kyle, Music, Evan Holmes, Austin Stormes played the entire season. We have some kids who can play,” said Ferguson. “I hope it just shows them the excitement of playing football on Friday night, especially at Coal Grove.”
The playoff excitement hit a fever pitch with fans during the final weeks of the season and especially in the playoffs.
“The excitement at the end of the year really took off. It was a lot of fun this year. I wanted this my first year, but to be expecting it would be foolish,” said Ferguson.
“But the kids bought in. Sometimes you have a couple of seniors who want to do it their way, but they were open to coaching. We’ve had a good group of kids. We had kids who would just listen to you.”
Looking back, Ferguson said it was hard to pinpoint one thing about the season that stood out.
“It’s hard to put a finger on it. I think it’s the excitement of Coal Grove football. The kids found out how fun it was to play football. I heard kids say it was the most fun they had in their life. That meant a lot.”

Jim Walker jim.walker@irontontribune.com PORTSMOUTH — Tayte Carver is a good listener. The Green Bobcats found themselves down 9-2 to start... read more