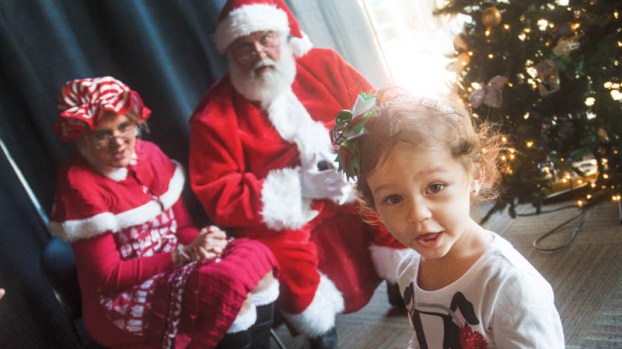 Naly Vallance weighs her options between seeing Santa Claus or Mrs. Claus during the Breakfast with Santa Saturday at the Ro-Na Theatre. The Friends of Ironton had a breakfast and a 5K run to raise funds for the theater’s restoration and for the Ironton High School majorette corps.

The Friends of Ironton hosted two events Saturday morning, with the aim of celebrating the holidays and raising funds for the restoration of the Ro-Na Theater.

The second annual Christmas 5K run took place early in the morning, with the starting point at the theater. Following the conclusion of the run, the theater was home to the group’s breakfast with Santa, also in its second year.

The event gave attendees a chance to enjoy a breakfast of pancakes and sausage, while children were able to pose for pictures with Santa, as well as a number of characters from Walt Disney cartoons, such as Mickey Mouse and Belle from “Beauty and the Beast.”

Suzie Hamlin, of Friends of Ironton, said part of the proceeds will go toward continuing efforts to restore the Ro-Na, while additional funds will go toward the majorette corps at Ironton High School.

Saturday morning was a date for many holiday-themed breakfasts across the county.

Lawrence County Clerk of Courts Mike Patterson, who attended the Ro-Na event, said he has also stopped by the Coal Grove Lions Club’s breakfast with Santa, as well as an event at the VFW in Ironton.

In addition to those, the Wyngate at RiversEdge in Rome Township hosted a holiday breakfast and South Point High School was the site of People for the Point’s annual Christmas Extravaganza.

Only 12 schools in Ohio received distinction CHESAPEAKE — A Lawrence County school is one of 12 in Ohio being... read more