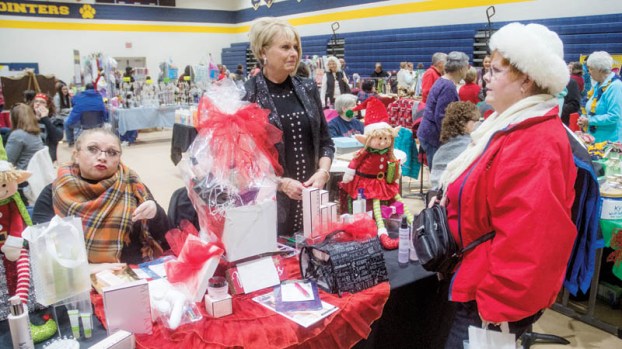 The event, organized by People for the Point, featured a pancake breakfast, a craft fair with 55 vendors, an inflatables room for children, holiday films and more.

Photos were also available with Santa Claus, with South Point students dressed as elves and helping out.

In the craft fair area, local artisans and vendors were offering opportunities for holiday gifts.

“They’re scented wax,” she said. “To go in simmering pots.”

“They’re made from different colors of clay,” she said. “They don’t need painted. I fire them in my oven at home.”

She said she maintains a shop on Etsy, Pixie Potter’s Palace.

Lisa Irish, secretary for People for the Point, said, in addition to the group’s members, many South Point students were volunteering as part of their community service project, while members of the village council were helping to serve the breakfast.

She said the proceeds from the event would go to the group’s future activities.

“We’re turning it around and putting it into projects for the community,” she said, citing events such as Party in the Park as well as a planned women’s defense class.

She said the group is also working to restore the village’s community center, which she said is in need of painting, restroom upgrades, new doors and windows.

The Christmas Extravaganza ran for five hours and concluded with a showing of both the animated version and live action film of Dr. Seuss’ “How the Grinch Stole Christmas.”

SP cracks down on past due bills

SOUTH POINT — Those who have amassed large, delinquent sewer bills in the village of South Point may be experiencing... read more