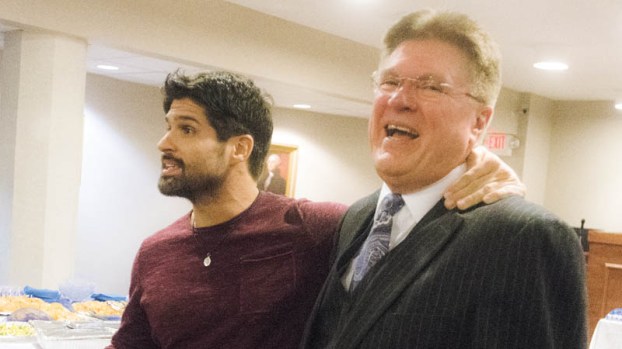 Judge calls it a career

Will continue to serve as substitute when needed

On Thursday afternoon, there was a retirement party for Ironton Municipal Court Judge O. Clark Collins Jr. who is stepping down after 36 years on the bench.

He is not running for Municipal Court judge again because of a state law that doesn’t allow anyone to be over the age of 70 when they take the office.

“I only missed running one more time by six months,” he said. “I would have probably gone for one more term. I feel good.”

He said that after he steps down on Dec. 31, he would be a substitute judge and sit in for judges who are on vacation or recuse themselves from a case.

His courtroom on the third floor of the City Center was filled with people he had worked with, from trustees to attorneys to law enforcement officers to staff members.

He said that the one thing he has always tried to remember was words of advice from his father, Oakley C. Collins, who told him “It’s not what you say, it is how you say it.”

“That has stuck with me all through my career,” he said. “I took that to heart and it was the greatest advice he gave me.”

He thanked everyone by name for working with him during his time as a judge
Collins’ bailiff, Dean Palmer, presented him with a gift from the staff, a Taurus 45 Colt/410 gauge handgun called the Judge.

“Thank you, guys. You are so ornery,” Collins said.

Collins said that the Ironton Municipal Court ranks among the highest for DUI convictions.

“DUIs have always been a problem and we worked on that,” he said. “We were number one in the state for convictions and getting drunk drivers off the road, so I was proud of that. And the credit goes to all you guys for that.”

He said that when a defendant appeared before him, it didn’t matter what their socioeconomic status was.

Collins said that one of the things he was proudest of was the court’s work program, which he started when he took office in 1981. He said it was a good way for people to work off jail time while doing good for the community.

“That’s my number one baby,” he said. “I am so proud of the work program. There weren’t any in the state when I started it to help the city. And it became something that helped the individual defendant too; we gave him the chance to work instead of going to jail. Or if they went to jail, to work their way out of jail.”

He said he was a pioneer and since he started the program, other courts around the state consulted with him on how the program worked and that it even became part of Ohio law.

“It saved millions of dollars and it improved the community,” he said. “They worked at cleaning exits, cemeteries, baseball fields and all around the county helping people out.”

Rockwood Avenue first projects of 2018 The Lawrence County Land Bank had its final meeting of the year on Wednesday,... read more