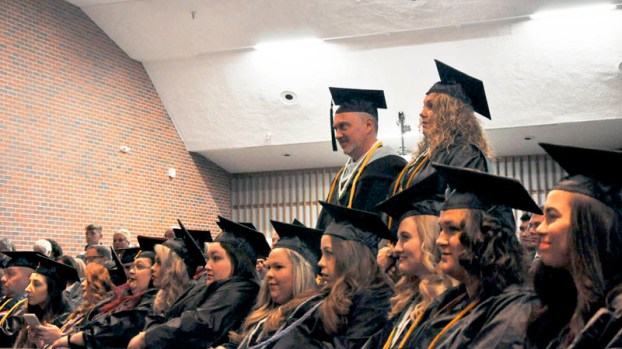 Master’s graduates Mike Donley and Courtney Reiser stand as they are recognized during the 2017 Fall graduate recognition ceremony.

With long nights of studying behind them for now, summer and fall graduates were all smiles Thursday night as Ohio University Southern held its Graduate Recognition Ceremony in Bowman Auditorium.

The Southern Campus, founded in 1956, held its first Graduate Recognition Ceremony in 1981, for a total of 46 graduates.  At Thursday night’s event, faculty and staff recognized 171 – 88 with associate degrees, 72 with bachelor’s degrees and 11 with master’s degrees. More than 40 graduates attended the event, with friends and family proudly looking on and cheering.

For Frankie Pratt, who received her bachelor’s degree in Early Childhood Education, the evening was bittersweet.

“I loved that the Southern Campus was small enough that I got to know everyone so well, but I’m excited to start substitute teaching in January and to make a little money working and doing something that I’m passionate about,” Pratt said.

Just minutes before the ceremony, Southern Campus staff member Mike Donley — who completed his Master of Science Degree in Computer Education and Technology from the Athens campus— was taking photos of his fellow graduates in their caps and gowns.

A quick outfit change later, he joined them in the line as they filed into the hall.

Much like other Southern Campus non-traditional students who make up nearly 35-percent of the campus’ enrolled population, Donley worked full-time while working on his master’s degree.

For him, it was worth the sacrifices as his degree will allow him to do more of what he enjoys.

“I absolutely love teaching and now I have the opportunity to do more of it,” he said.

Donley is thinking about pursuing a Ph.D. at some point in the future. “It’s definitely something I think about. I love the research element,” he said.

Doug Korstanje, a 1990 graduate of Ohio University and now vice president of Marketing and Community Relations for St. Mary’s Medical Center, shared his congratulations to those who finished their degrees.

“By furthering your education and what you’ve done to earn this degree, you now have the tools to accomplish anything you want to do,” Korstanje said.

“Some of you may be the first in your family to graduate college – others are continuing a family legacy of higher education. For each of you, no obstacle is too great. You are leaders.”

CHESAPEAKE — The next election for the office of Chesapeake’s mayor is not until November 2019, but one candidate has... read more