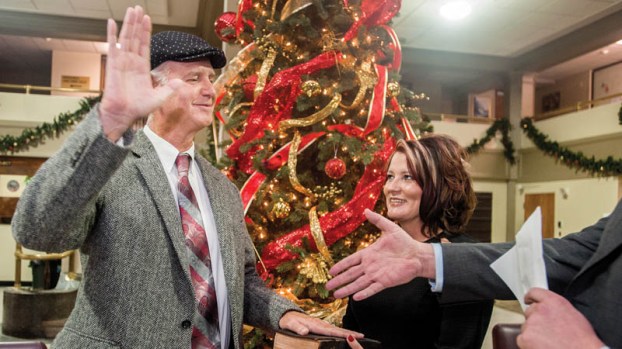 Alyce Waldo beams up at her husband after he took the oath of office for Ironton Municipal Court judge Friday afternoon at the Ironton City Center.

In his 38-year career, Waldo has held a number of positions: attorney, assistant prosecutor for 30 years and city councilman for 12 years. In November, he won the election to become judge. He will take office on Jan. 1 and start hearing cases on Jan. 2.

“I’m very excited by this,” he said. “The first thing, we are going to have to open up a drug court to handle the situation with the drug epidemic and the addiction causing problems with the families.”

The swearing in ceremony on Friday in the lobby of the Ironton City Center, it was crowded with well-wishers who gathered to see Waldo sworn in by attorney JT Holt.

“We expected about 50 people,” Waldo said. “Seems like we have about four times that much. I thank all of you for being here.”

After taking the oath of office, Waldo spoke to the crowd, often choking up.

“I get emotional about things like this,” he said, adding that all through the election process, he tried to stay grounded. “I appreciate all your efforts and all your help. It means a lot to me.”

He said people’s politics would not matter in his office.

Waldo introduced the people that would serve in his office. Randy Edwards will be his bailiff and he has known him for most of his life. Edwards worked at Dow for 30 years and recently retired.

“We are going to help him learn how to be a bailiff and I am going to try to learn to be a judge,” Waldo said.

Pam Rowe will be Waldo’s clerk of courts. Waldo joked that his dad hired her and that she walked off the stage after graduation at Rock Hill High School to the office and got a job at the firm. She has been Waldo’s secretary for 36 years.

Elaine Kleinman was hired as a clerk. She was let go from her job on Sept. 1 after more than 23 years working at the Ironton Municipal Court. Waldo said, during his campaign, that he told her not to put away her work clothes because, if he won, he would hire her back.

Waldo named Vince Sheridan to be his director of the community service program.

“What we are going to do with the community service program is double it or triple it,” Waldo said.

“We are going to get out there and help out all the county that is in our jurisdiction, not just Ironton.”

After he introduced his staff, Waldo swore in Randy Wise and Michael McDaniels as Upper Township trustees.