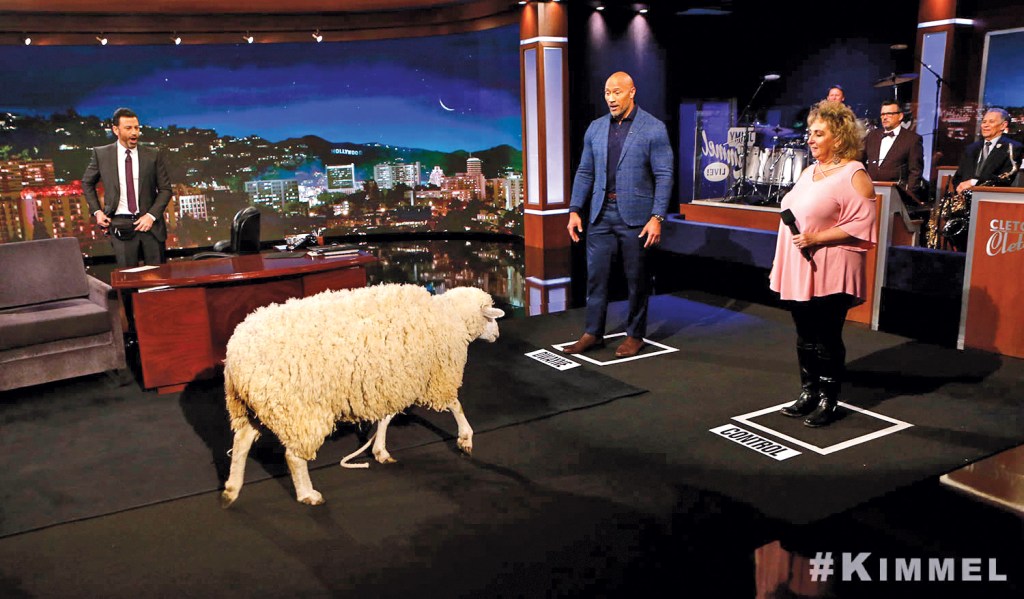 Ironton native takes part in bit with The Rock

A local woman was seeing the sights in Hollywood earlier this month and got an unexpected 15 minutes of fame from the trip.

Jane Tackett, an Ironton native who now lives in Flatwoods, was visiting Los Angeles with her husband, Roy, and daughter Chelsey.  Her daughter, Bria Boggs, and son-in-law, Hunter Boggs, are enrolled there in a 15-week nursing training program. 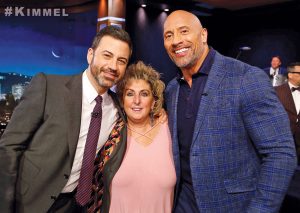 The Tacketts, who recently moved to Flatwoods after 29 years in Kitts Hill, are the owners of Tackett’s Body shop in Ironton.

While visiting their daughter, the family decided to take in a few live tapings of television shows, including “The Price Is Right,” “Wheel of Fortune” and the Dec. 12 episode of “Jimmy Kimmel Live!”

She said, while waiting on the taping, one of Kimmel’s producers approached her.

“She said, ‘I love your outfit’ and asked if I wanted to be on the show. And knowing that one of the guests was actor and wrestler Dwayne Johnson, aka “The Rock,” she was excited to agree to it.

She said Kimmel’s crew arranged for them to be seated in the front row of the audience, then asked an unusual question.

“She asked if I had any allergies,” Tackett said. “I thought, ‘What are they doing?’ and she said, ‘Don’t be afraid. Everything will be fine.”

She said the segment of the show, which also featured director Guillermo del Toro and musical guests G-Eazy and Halsey, began with Johnson and Kimmel discussing their lives in college.

Then, the conversation turned to a study by Cambridge University, in which a sheep was shown two pictures, one of a celebrity and one of a non-famous individual, and the animal almost always chose to go to the photo of the star.

Kimmel said he wanted to try the experiment “on a real, live celebrity” and got Johnson to agree.
Johnson then went to the audience, where he invited Tackett up on stage, and said, “I’ll select this lovely lady in pink.”

She said while Johnson was greeting her, Kimmel joked about the lack of attention he was receiving in comparison to the film giant.

She and Johnson were then asked to stand in squares marked on the stage, and Kimmel’s sidekick, Guillermo Rodriguez, dressed in a labcoat and posing as a scientist, brought the animal, named Daisy, out on a leash.

Johnson asked if the sheep would be distracted by Tackett’s pink shirt or if it was color blind, to which Rodriguez, feigning expertise, said it would not be the case.

Tackett said when it approached, like the Cambridge study, it chose the famous face.

Kimmel then told Johnson that, since he won, he got to keep the sheep. To Tackett, commenting on the bizarreness of the sketch, he joked, “Jane, you really don’t know what the hell is going on right now, do you?”

The show then went to a commercial break, and Tackett said Kimmel and Johnson then graciously posed for a photo with her, of which she was given a copy, as well as  a still from the segment.

“They had me sign a release,” she said, which gave consent to be on the show. “And they told me I could share them with whoever I wanted,” she said.

Tackett said she was surprised when seeing Kimmel’s show, as well as the others, that the sets were so much smaller than they appear in the broadcast.

“They look so much bigger on TV,” she said. “When you see ‘The Price is Right’ on TV,’ everything looks huge.”

While they weren’t “called on down” on that show, she said the family did get to interact with stars of “Wheel of Fortune.

Before taping the show, host Pat Sajak and hostess Vanna White took questions from the audience.
Tackett said her daughter asked White if she picked her wardrobe for the show.

She said White told them that her outfits are chosen for her and that, after the taping, “I never see them again.”

Tackett said she enjoyed the trip and seeing the shows in person.

“I’m a fan of them,” she said. “And we’ve always especially watched Wheel of Fortune.”

She said the episodes of the two game shows will run at a later date and she doesn’t know yet if the family will be seen in the audience during the broadcast.

The Kimmel episode, which has already aired, is available for viewing ABC’s website at http://abc.go.com/shows/jimmy-kimmel-live/episode-guide/2017-12/12-dwayne-johnson-guillermo-del-toro-music-from-g-eazy-featuring-halsey.