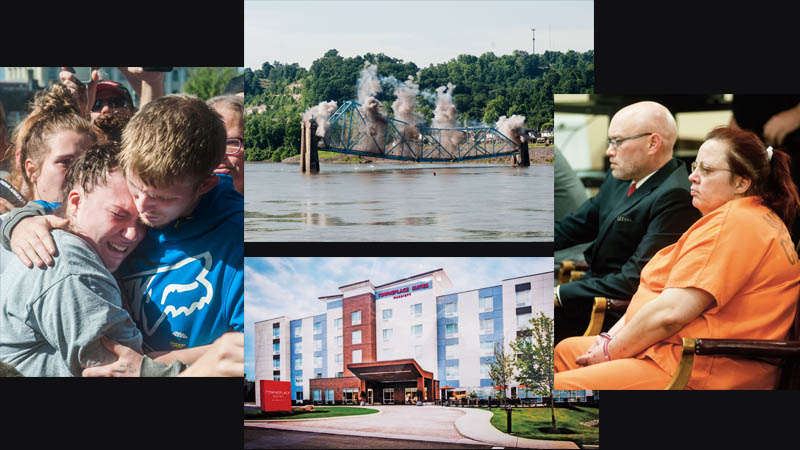 Decatur Township quadruple homicide, demolition of the old Ironton-Russell Bridge, Economic Development and a Chesapeake murder case were just a few of the top stories from 2017.

The county was shocked to awaken the morning of Oct. 12 to learn of the slaying of four at a home in Decatur Township the prior night. Police found Donald McGuire, 50, his wife, Tammie L. McGuire, 43, her daughter, Stacey M. Jackson Holston, 24; and Jackson’s son, Devin Holston, 8, dead of gunshot wounds. Jackson’s husband, Todd Holston, received stab wounds and fled to a neighboring home, where he called police.
A two-day manhunt by sheriff’s deputies and police led to the arrest of suspect Arron Lawson, 23.
The tragedy drew national headlines and showed the strength of the community, which came together to support law enforcement during the search and to offer aid and comfort to Holston and his family.
A grand jury indicted Lawson, who was Jackson’s cousin, on four counts of aggravated murder, one count of attempted murder, felonious assault, aggravated burglary, rape, abuse of a corpse, kidnapping and other changes. County Prosecutor Brigham Anderson said he would seek the death penalty for Lawson. A trial date is set for Aug. 6, 2018.

2. BRIDGE GOES BOOM
For nine decades, the Ironton-Russell Bridge connected Ohio and Kentucky. It opened on April 21, 1922 and was the first highway bridge along the Ohio River between Parkersburg, West Virginia and Cincinnati. The bridge was light-blue with a cantilever design and had two lanes for traffic and a narrow sidewalk for pedestrians.
In 1999, it was deemed “functionally obsolete and structurally deficient” by the Ohio Department of Transportation. The steel was so old that the bridge would be closed down when temperatures approached minus 5 degrees Fahrenheit.
On May 5, crews from Brayman Construction Company and Advantage Blasting brought down the bridge’s anchor arms and the last remaining steel sections of the cantilever span fell into the Ohio River.
Residents as far away as Hecla and Kitts Hill reported on social media that they were able to feel the vibrations from the blast.
The old bridge was replaced by the Oakley C. Collins Bridge, which opened in December 2016.

3. ECONOMIC DEVELOPMENTS
2017 saw several economic developments, with HarbisonWalker announcing the opening of its new plant at The Point industrial park. The facility, the first new factory for the Pennsylvania-based refractories company, is expected to employ 40 people and be fully operational in mid-2018.
Tudor’s opened their first Ironton location in March and the Chatroom Café opened downtown in June. Across the river in Kentucky, Braidy Industries announced a new $1.3 billion plant to be built in Greenup County. In September, Marriott Towneplace Suites announced plans to build a new $15 million hotel at the Gateway Centre in Ironton, which would employ nearly 40 people.

4. MURDER IN CHESAPEAKE
This past spring, Chesapeake was rocked after a woman was arrested for the murder of her husband. His body was found in a basement refrigerator in their home.
Tina Campbell-Adkins, 43, is accused of killing her husband, David Adkins. She is awaiting trial on charges of aggravated murder felony and tampering with evidence, a third-degree felony.
A warrant was issued after an informant came forward on the evening of March 30 to tell police that they believed Tina had harmed David and that his body was inside the residence. Police had performed a wellness check earlier that day, after his family filed a missing persons report, but officers had no probable cause to enter the home at that time.
Campbell-Adkins is awaiting trial in Lawrence County Common Pleas Court.

5. CHESAPEAKE POLICE ISSUES
The Village of Chesapeake was left without a police chief for the third time in less than two years, when interim Chief Randy Lewis announced his resignation, citing disagreements with Mayor Tommy Templeton.
Lewis’ departure, which came with a letter accusing the mayor of corruption, happened in a contentious emergency meeting of council. His departure followed that of Lenny Abrams, who had resigned after disagreements with Templeton, and the removal of Dennis Gibson by council at the request of the mayor in 2016. The position is temporarily being filled by Randy Lewis.

7. DRUG BUSTS
Several large drug busts took place throughout the county this past year in 2017.
In January, four locations in Ironton were searched, stemming from a three-month investigation into an organized group from Michigan and Ironton distributing large quantities of oxycodone pills.
During the searches, officers seized two assault rifles, two handguns, $12,235 cash, 190 morphine tablets and 4,152 oxycodone tablets, with a combined estimated value of $174,000. The bust was the largest seizure oxycodone tablets in Lawrence County to date.
In March, two men were arrested on drug charges in Chesapeake following a traffic stop. Driving the vehicle was Richard S. Thompson, of Chesapeake, and the passenger was Billy C. Edwards, of Milton, West Virginia. During the investigation, heroin, oxycodone tablets, methamphetamine, a loaded handgun and $6,670 cash was seized. A warrant obtained for Thompson’s residence also where 65 grams of methamphetamine, two firearms and $47,551 in cash was found.
Also in March, the village of Coal Grove recorded its largest marijuana bust in history following a traffic stop.
In the vehicle, officers found a .45-caliber handgun, $150 cash and 4.25 lbs. of marijuana in vacuum-sealed packages with an estimated street value of $40,000.
William Moudy, of Lexington, Kentucky, Tyler Privette, of Upton, Kentucky, and Madalyn Swisher, of Lexington, Kentucky, were arrested.
Besides these three cases, numerous other drug busts also took place, making it one of the top stories of the year.

8. LAND BANK
The Lawrence County Land Reutilization Corporation, better known as the land bank, had a very successful 2017, demolishing 67 structures
The land bank was started with a $4.3 million grant from the Ohio Department of Housing’s Neighborhood Initiative Program and targets dilapidated and abandoned properties that are at least one year behind on taxes, are demolished. The structures and the propery are sold at fair market value.
Stephen Burcham, Lawrence County treasurer and head of the land bank, said it has been a great success for Lawrence County, and the model has been observed by several other land banks throughout the state to follow.
The first demolitions in 2018 will include five structures on Rockwood Avenue. in Chesapeake.

9. MICKEY FISHER DONATES
Ironton native Mickey Fisher has made a name for himself as a television writer for such shows as “Extant” and the upcoming “Reverie.” Although he now lives and works in California, he remains committed to helping out people in Ironton.
In August, he brought the cross county running film “Varsity Punks” to the Ro-Na theater for the Ironton High School cross country team to see before the season started.
In September, Fisher donated $10,000 to Ironton High School. The money will be split three ways between the band, varsity singers and the performing arts department, as well as a $2,500 donation to the robotics team.
“I believe that art and science make the world a better place,” Fisher said of his donation.
In December, Fisher bought out a screening of Star Wars: The Last Jedi at the Ashland Cinemark Cinema 10. To get a ticket for free, all anyone had to do was trade two non-perishable food items to the Harvest for the Hungry food pantry in Ironton.
“That way it would benefit the community too,” Fisher said.

10. RETIREMENTS
Several notable retirements took place in Lawrence County in 2017.
Lawrence County EMS Director Buddy Fry retired on Dec. 16 after 45 years with Southeast Ohio EMS from 1973 to 2010, and then Lawrence County EMS from 2010 until the present. Fry was also one of the key reasons countywide EMS was brought to Lawrence County after Southeast Ohio EMS decided to stop its operations.
Ironton Municipal Court Judge O. Clark Collins Jr. retired this year as well after 36 years on the bench. He takes great pride in the court’s work program, which he started when he took office in 1981. Collins will continue to serve however as a substitute judge when needed.
Longtime Chesapeake Village Councilman Paul Hart, 75, also called it a career this year. Hart served on the village council in Chesapeake for 31 years, and was known to be one of its most outspoken members. Besides being on the Chesapeake council, Hart was also a well-known businessman in the village for many years. Hart was recognized as an “Outstanding Resident of Lawrence County.”
Lawrence County Sheriff’s K-9 Hemi retired in May after 10 years of service with the department. Hemi, along with his handler, Sheriff’s Deputy Scott Wilson, were involved with numerous drug busts in Lawrence County throughout his career.

CHESAPEAKE ELEMENTARY HONORS
Chesapeake Elementary earned accolades for its academic performance. The school, under principal Trisha Harris, was named a High Progress School of Honor by the state Department of Education in December. The distinction is given to schools, serving economically-disadvantaged students, for improvements in scores in state testing. Harris honored eight of the school’s students at a board of education meeting in September for achieving rare, perfect scores in math testing at the state level.

DEANNA HOLLIDAY AND JEFF GASKIN
Two Lawrence County politicians were named to prominent positions this year.
In December, Lawrence County Commissioner DeAnna Holliday was elected to the County Commissioners Association of Ohio (CCAO) 2018 Board of Directors.
Holliday, who currently serves on the CCAO Jobs, Economic Development and Infrastructure Committee, is the first person from Lawrence County to serve on the board of directors.
In the fall, South Point Mayor Jeff Gaskin was elected to a two-year term on the executive committee of the Ohio Mayor’s Association. He will represent District 11, which covers the counties of Lawrence, Pickaway, Hocking, Ross, Vinton, Pike, Jackson, Scioto, Meigs and Gallia. Gaskin has been the mayor of South Point since December 2015.

STORM
This past spring, a heavy storm that was reported as a tornado by the National Weather Service struck the outskirts of Ironton, causing severe damage.
Around 100 trees were knocked down as a result, and several properties were also damaged.
The majority of the damage took place on Porter Gap Road and Lawrence Street. Trees were also reported down on County Road 29.