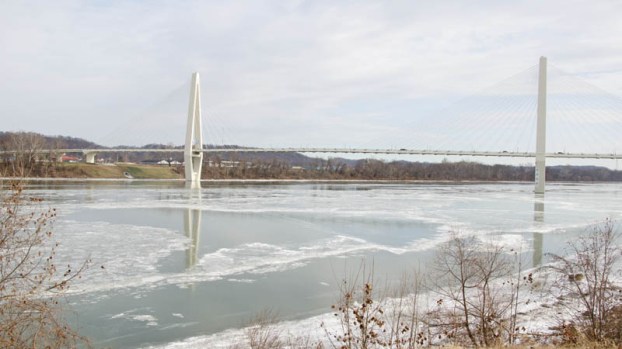 The Oakley C. Collins Memorial Bridge as seen from the Kentucky side of the Ohio River. The recent subzero weather has been cold enough to nearly freeze the river into a solid sheet of ice.

The recent stretch of subzero weather has turned the Ohio River icy.

According to the National Weather Service is uncommon for the Ohio River to freeze solid.

The federal agency’s website said the earliest record of it freezing was in 1856.

There are photos from 1918 when the river froze solid after three months of temperatures averaging around 28 degrees.

The entire length of the Ohio River was frozen until Jan. 20, 1918. The freeze caused an estimated $1 million in damage to barges and other boats.

The Ohio River is unlikely to freeze solid this year as weather forecasts call for temperatures in the low 60s on Thursday.