One sought after Dec. 28 escape from detention center

CATLETTSBURG, Ky. — The third of four inmates who escaped the Boyd County Detention Center has been caught.

On Dec. 28, four inmates, Austin Childers, Thomas Bentley, Isiah Bare and Joseph Salyers, got out of the detention center around 3:30 a.m. and weren’t discovered missing until 8:30 a.m. after a head count. They escaped after they broke a lock on a maintenance door and went into the ceiling. There, they removed a HVAC unit and got onto the roof and jumped off. They had changed into street clothes before the escape.

Childers was captured on Saturday and taken to the Greenup County Detention Center.

Bare was captured a day after the escape in Westwood, Kentucky. Salyers was captured on Jan. 3. Law officials are still searching for Bentley. Anyone with information can call 606-329-2191 or 911.

One jail employee was fired after the escape for failing to follow procedures and didn’t check on inmates who didn’t come to their cell doors and didn’t notify a supervisor about it.

There were a total of 10 escapes from the detention center in 2017, amongst other incidents at the facility.

On July 30, four inmates escaped the detention area via a pipe chase, broke through into a mop closet into an unsecured area of the jail, and went out an emergency fire exit. Three were captured with four days while a fourth one spent almost a month on the run before being captured in Greenup County.

On Aug. 20, the detention center was closed down temporarily after a small riot broke out but was contained to a single cell.

The detention center has also seen a number of inmates overdosing on illegal drugs.

The day before Thanksgiving an inmate escaped the facility by jumping over a fence.

The Kentucky Department of Corrections will no longer house state inmates in the facility.

In mid-December, it was announced that four Kentucky state agencies were investigating the detention center for malfeasance.

And that evidence would be presented to a grand jury at a later time.

Fall Festival to be held as part of ACTC Spirit Week 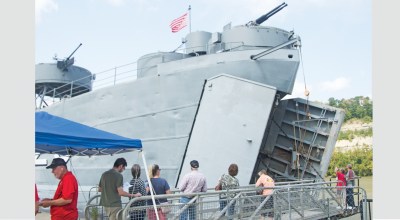 Visitors turn out for WWII ship