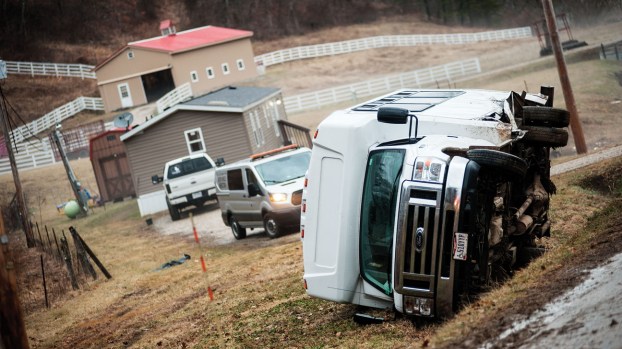 Jessica St. James/The Tribune A special need bus lies on its side on County Road 64 in Mason Township Thursday evening.

MASON TOWNSHIP — Crews responded on Thursday to the scene of a special needs bus crash on County Road 64.

The Windsor and Aid Township fire departments, as well as Lawrence County EMS and the Ohio State Highway Patrol arrived after the bus went off the road into a ditch.

“We received a call that a bus was on its side,” Lewis Pauley, the Aid fire chief said, stating that there were six adults in the vehicle. “We managed to get them all out.”

Pauley said at least two were taken to a hospital. He said any injuries received appeared to be minor.

Pauley said it was likely the bus, traveling on the windy road in rainy conditions, hit a patch of mud, which caused the driver to lose control.

Has been Ironton Schools superintendent since 2003 At a special meeting of the Ironton Board of Education on Tuesday, Ironton... read more