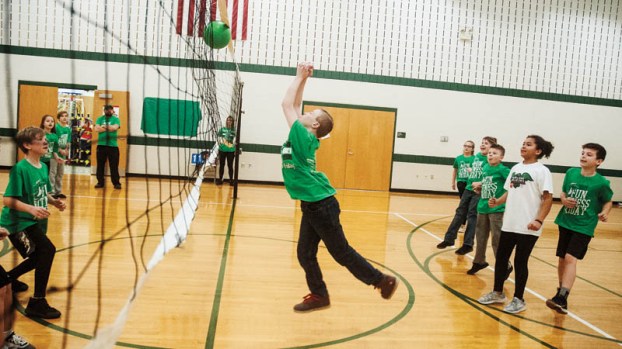 Eleven-year-old Damien Price races the net during a game of volleyball at Fun Fitness Friday at Fairland West.

ROME TOWNSHIP — The weather was rainy and getting cold Friday, but students at Fairland West Elementary found a way to get exercise.

“This time, it’s a volleyball tournament,” phys. ed teacher Nathan Speed said. “We have five to six games with grades three through five.”

The students filed in every few hours by grade level, wearing matching green school shirts to take place in the event, where they could be heard breaking into cheers for their classmates.

He said the other Fitness Friday events usually take place outside, but the school hosts the volleyball tournament for the winter months.

“We do this every nine weeks, as a reward for them, and to get them up and exercising,” Speed said.

He said there is a lot of build up to the event.

“The hardest part is keeping the teachers calm,” he said. “They get pretty competitive.”