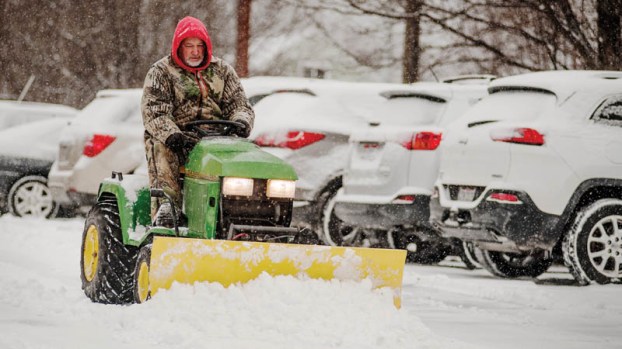 A worker plows out the employee parking lot of Lawrence County Jobs and Family Services during a snowfall the night before.

With a big snowfall on Tuesday, people took advantage of a sudden day off by hitting Moulten Hill to do some sledding. Most spent the day trying to keep sidewalks clear as the snow kept falling.

The day started off with Lawrence County Sheriff Jeff Lawless declaring a Level 1 snow emergency because of drifting snow and urged people to use caution while driving. By 2 p.m., he declared a Level 2 snow emergency and cautioned that only those who felt it is necessary to drive should be out on the roads. Most schools had already cancelled classes for Wednesday.

No more accumulation is expected for the week and temperatures are forecast to warm up to about 50 degrees by Saturday.

• Accelerate and decelerate slowly. Applying the gas slowly to accelerate is the best method for regaining traction and avoiding skids. Don’t try to get moving in a hurry. And take time to slow down for a stoplight. Remember: It takes longer to slow down on icy roads.

• Drive slowly, since everything takes longer on snow-covered roads.

• The normal dry pavement following distance of three to four seconds should be increased to eight to 10 seconds. This increased margin of safety will provide the longer distance needed if you have to stop.

• Don’t stop if you can avoid it. There’s a big difference in the amount of inertia it takes to start moving from a full stop versus how much it takes to get moving while still rolling. If you can slow down enough to keep rolling until a traffic light changes, do it.

• Don’t power up hills. Applying extra gas on snow-covered roads just starts your wheels spinning. Try to get a little inertia going before you reached the hill and let that inertia carry you to the top. As you reach the crest of the hill, reduce your speed and proceed down hill as slowly as possible.

• Don’t stop going up a hill. Get some inertia going on a flat roadway before you take on the hill.

• Stay home. If you really don’t have to go out, don’t. Even if you can drive well in the snow, not everyone else can.