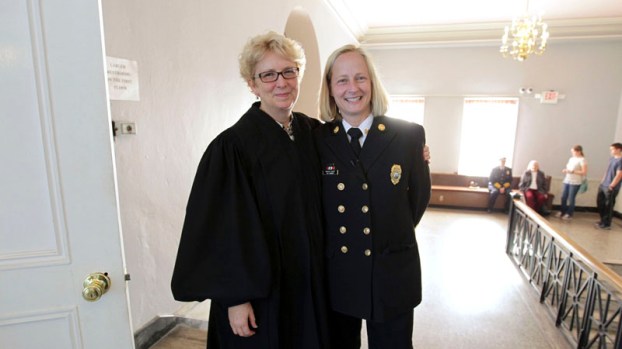 Cabell Huntington drug court judge Patricia Keller and Huntington Fire Chief Jan Rader are two of the stars of Netflix documentary 'Heroin(e)'. The film was nominated for an Oscar.

When the 2018 Oscar nominations were read off on Tuesday morning, Heroin(e), the Netflix documentary about the opioid crisis in Huntington, West Virginia, was amongst the films on the list to run for the prestigious movie award.

Heroin(e), with its 40 minute running length, was among five films in the Best Documentary Short category.

One of the subjects of Heroin(e), Jan Rader, Huntington Fire Department chief and an Ohio University Southern alumni, said she was in a meeting when the announcement became public and her phone “blew up” with congratulatory calls.

“I am humbled and very honored,” she said. “I am very happy for (film maker) Elaine McMillion Sheldon and her husband, Kerrin, because they are very deserving.”

McMillion Sheldon said she was so honored and humbled by the announcement.

“Heroin(e) examines an epidemic that many communities are struggling with, so, for this topic to have captured the attention of the Academy means so much to us, as filmakers and to those on the frontlines,” she said. “As native West Virginians living in the midst of this public health crisis, we believe the stories of these three tenacious and resilient women are what this country needs — a message of hope and survival to show us a way forward.”

Heroin(e) follows Rader, Brown Bag Ministries founder Necia Freeman, and Cabell Huntington drug court Judge Patricia Keller as they deal with being on the front lines of fighting drug abuse. On Dec. 6, the Academy of Motion Picture Arts and Sciences announced the documentary was on the list of 10 films that they would consider for nominations out of 77 possible contenders.

Rader said she didn’t know yet if she would be going out to Hollywood for the Oscar ceremony on March 4.

“I’m sure all that will be worked out in the next couple of days,” she said.

Another person who was very proud of the Oscar nomination was Rader’s mother, Kay, of Ironton. She too was blown away by the situation and didn’t think it would go this far.

“I was flabbergasted,” she said. “I am excited for her.”

She said she wasn’t really surprised though.

“I thought after they made the short list, I began thinking about it and I thought ‘Why not?’

They are as good as anyone and it is a really important subject,” she said. “I am really excited for her and I think it’s a great thing.”

Since the documentary came out, Rader has been on quite a few television and radio shows talking about the opioid crisis in West Virginia as debate over the drug crisis has gained national attention.

Rader has said that she thinks the documentary is a great educational tool to show what is going on, not only in Huntington but also across the nation.

“If it starts conversations that will lead us out of this, its well worth it,” Rader said. “And some schools are showing it as an educational tool. So, prevention is a key to this crisis.”

“Heroin(e),” A Netflix Original Documentary, was made in association with The Center for Investigative Reporting, A Requisite Media Production. Sheldon won a 2013 Peabody award, 2014 Emmy nomination and third prize in the World Press Photo Multimedia Awards of “Hollow,” an interactive documentary. She has done work for such organizations as Frontline PBS, The Center for Investigative Reporting, New York Times Op-Docs, TEDWomen, Field of Vision, and Mashable. She is also a founding member of All Y’all Southern Documentary Collective.

Ciccarelli had served in position since 2014 HUNTINGTON — Joseph Ciccarelli, who has served as the police chief for the... read more