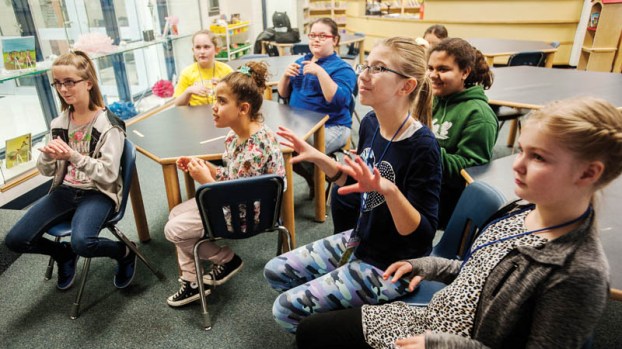 SOUTH POINT — Bindi Staley said she was attending her brother’s karate class when she met a deaf girl and knew she wanted to talk to her.

As a result, she took up sign language, learning it through her church, South Point First Church of the Nazarene.

Her school recently began hosting recess clubs, giving students something to do when the weather prevented going outside, administrative assistant Bill Christian said.

He said Bindi approached him and said there should be a sign language club.

“She said ‘I can teach it,’’ Christian said.

Bindi, who is in the fifth grade, is a Star Student and on the honor roll at the school. She is involved in gymnastics, on the praise team at her church and takes part in summer theatre at Hart in the Park in Huntington.

She is assisted in teaching the class by fellow Star Student and honor roll member Kaylee Hatton.

Bindi said this is the second time she has taught sign language. Her class is comprised of 10 girls, ranging from third to fifth grades, who meet each week for about 20 minutes a session.

Christian said membership in the recess clubs rotates, so that all those who have interest get a chance to take part.

On Tuesday, Bindi and Kaylee were leading the group in signing the lyrics to the song “Lost Boy” by Canadian singer Ruth B.

Christian said the group will eventually perform what they have learned at a school assembly.

“Is there anything else you would like to learn,” Bindi said, opening up the session for questions.

Several students wanted to learn how to spell their names in sign language, while other asked how to do specific words, such as “beautiful,” “school,” or how to ask questions, such as “How old are you?”

They also worked their way through the Christian hymn “Blessed Assurance,” with its lyrics of

“This is my story, this is my song, Praising my Savior all the day long.”

Bindi took suggestions from the group for other possible songs to learn, and she went through the alphabet, showing the group how to do each letter.

Bindi said this is her second time teaching her skills to others and that she would be interested in pursuing it further and doing more as an instructor.

“I’ve really enjoyed it,” she said. “I love teaching something to others and sign language is one of the most important things you can learn.”