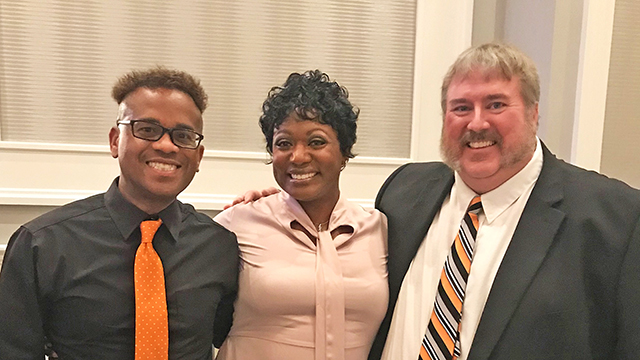 COLUMBUS — Anissa Campbell is still winning in track.
The talent track star for the Ironton Lady Fighting Tigers and Tennessee Lady Volunteers added another honor to her storied career when she was inducted into the Ohio Association of Track and Cross Country Coaches Hall of Fame on Friday.
Campbell was virtually unbeatable in the 100 meters in high school. She lost once as a freshman to a senior in an exhibition meet and was unbeaten as a sophomore, junior and senior as she won three straight state championships in the race.
After that freshman year, Campbell never lost another 100-meter race at any level — not even a qualifying heat, not in duals, not at an invitational or the state meet.
Campbell had one of the most memorable state meet performances as a senior when she won the 100 meters, 200 meters, anchored the winning 4×100 relay and was fourth in the long jump.
Her effort helped Ironton rack up 30 points and earn a state runner-up team trophy.
Campbell began her senior year at Ironton by winning the 55-meter dash at the Ohio Indoor Classic and ended it by winning the 100-meter dash at the Midwest Meet of Champions.
Her school records in the 100 meters is 11.81 seconds and 25.0 in the 200. She is also a member of the school record 4×100 relay team.
Campbell signed with Tennessee where she earned All-American status twice.
She was on the 4×100 relay team that played eighth in the NCAA meet in 1996 and three of the same foursome returned the following year and ran a 44.07 to earn third place in the NCAA meet.
Campbell set personal best times in the 100 meters at 11.62 seconds and 23.97 in the 200 meters her senior year for the Vols.
The 2018 induction class included Cincinnati La Salle coach Frank Russo, Marion High School and Ohio State runner Richard Bruggeman, Woodridge High School track and cross country runner Jeff Howard, Springfield South track star Camee Williams Beyers, Sandusky St. Mary’s state champion discus and shot put thrower Beth Weyer Hubans and Archbold High School and Auburn University distance runner Rachel Sauder Kinsman.
Campbell was inducted into the Ironton Athletic Hall of Fame in 2014. She currently lives in Houston.