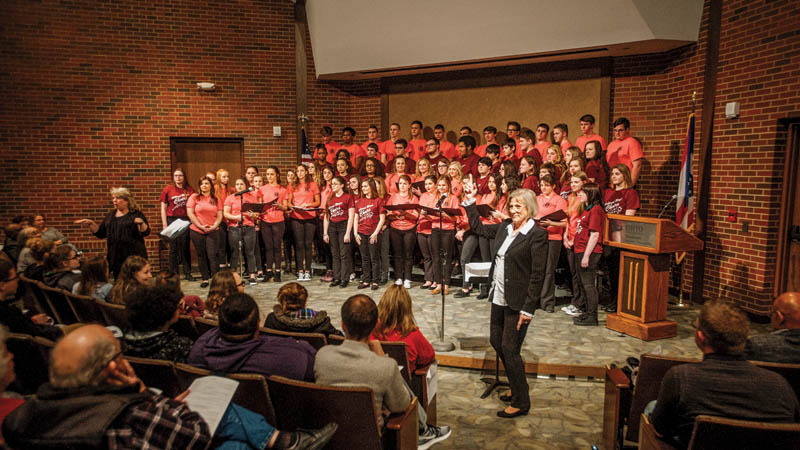 This was 26th year of event

A famous quote by Dr. Martin Luther King Jr. in a speech at Cornell College in Mount Vernon, Iowa in 1962 was spoken many times by speakers at Ohio University Southern Thursday night during the school’s 26th annual MLK community celebration.

The annual event honoring Dr. King is all about accepting diversity; inclusion and everything that King stood for, and featured several speakers and musical selections. The theme of this year’s event was “I Am…” and focused on everything that makes up each individual person.

The program kicked off with OUS pre-social work major Kara Spencer speaking about the occasion before OUS Dean, Nicole Pennington, welcomed the nearly full crowd in the Bowman Auditorium.

Amy Compston, of Ashland, Kentucky and vice president of Amy for Africa, spoke to the crowd about everything that she is and what she has overcome in her life to get where she is today, including two overdoses, and the importance of God in her life.

The next part of the program was the singing of “Up to the Mountain” by the Ironton High School Varsity Singers before Ironton Quinn Chapel AME pastor Margaret Tyson took the microphone, who told stories about growing up and the challenges that African-American people faced as well as how she was able to overcome some of those things.

Another song, “He Ain’t Heavy, He’s My Brother” was then performed by the Ashland Paul G. Blazer High School Concert Choir followed by Lawrence County Common Pleas Judge Andy Ballard speaking about everything he is and the importance of breaking down the barriers to accept and respect all people just because they are human beings.

Ohio University Southern students Reagan Williams, Amber Coffee and Madison Evans then read the winning essays from middle school and high school students in the university-sponsored “I Am…” essay contest to continue the evening before awards for the contest were given out.

The Ironton High School Varsity Singers and the Ashland Paul G. Blazer High School Concert Choir then followed up by performing “Love Can Build a Bridge” together.

The program then concluded with a musical selection, “Glory” led by Susan Taylor.

For additional photos, see the Focus section in the Weekend Edition of The Tribune.