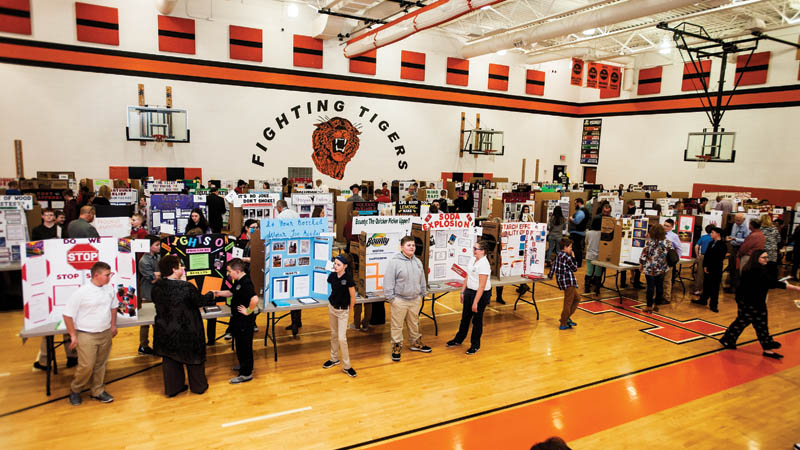 The host school for the completion rotates each year, and for this year’s event, students gathered in the gymnasium at Ironton Middle School.

Julie Walters, student service coordinator for the Lawrence County Educational Service Center which organizes the fair each year, said there were 154 students taking part in the fair, coming all but one of Lawrence County’s school districts.

“There were 14 team projects and 124 individual projects,” she said.

To participate in the county fair, students had to earn a “Superior” rating at their individual school fair, which took place earlier this year.

The event was open to students from fifth through eighth grades, and projects employed the scientific method, with a question proposed, a hypothesis, and experiment and then an analysis of results.

Most came from the middle school levels of sixth grade and up, but the fair included two fifth graders.

One was Samuel Walker, of St. Lawrence School in Ironton.

Walker was articulate and spoke extensively about his project, which measure whether surrounding temperature affects the brightness of a glow stick.

To test this, he put three sticks into a separate container of water, wiht one at 34, one at 70 and one at 130 degrees Fahrenheit.

Walker said in his hypothesis that he thought the warmer a climate, the brighter the stick would glow.

He said he figured the chemistry of the stick, when heated, would react more and be more active.

Following his tests, Walker found the results matched his prediction.

However, he said he also learned that, as time passed, the opposite took hold, with the warm stick going dim and the cold one becoming brighter.

“The chemicals in the hot one had the reaction faster,” he said, proposing an explanation and theorizing that the warm stick had used up all of its chemical reaction.

Many students incorporated activities they are involved with into their projects, such as Kendall Speaks, a seventh grader at Rock Hill Middle.
She was studying whether air pressure in tires could affect speed during wheelchair basketball.

Speaks said she used an air pump and tested various levels of pressure and the time it took for her to travel 40 meters.

She said her results matched her hypothesis, with the more inflated tires allowing for better speed.

Hannah McKenzie, of South Point Middle, has competed at the county level in academic events before.

She represented her school in last year’s county spelling bee, then qualified to take part at the regional bee in Athens.

She was at the science fair with her project, in which she tested which type of soda would clean coins the fastest.

In her hypothesis, she thought Coke would work best, as it is the most acidic and has the highest pH level, while the grape soda she tested would work slowest, being the least acidic and low in pH.

She put pennies into containers with each soda, then waited 24 hours and compared with “before” photos.

The results matched what she had figured.

“The Coke cleaned the most and the grape was the least,” she said.

“Bombs Away” was a project by Luke Jenkins, a Coal Grove sixth grader.

He was testing angles and other factors in how far a catapult would launch a ball.

Jenkins built the devices, from wood and rubber bands, to run a series of tests.

As he figured, angle was the biggest factor, with the greater angles, the greater the effect on launch.

He said the more the catapult was pushed down, the bigger the arc of the launch.

“It’s like a rainbow,” he said of the ball’s flight path.

Lisa Massey, who works at Our Lady of Bellefonte Hospital, was one of the judges for the event.

“I learned a lot today,” she said of the students who presented to her. “There were a lot of very interesting topics. They covered everything. The projects are neat and they’ve taken their time on them. It’s very important to see that they’re working on things and learning.”

Those who get a “superior” rating from the judges will be eligible to compete in the District 14 Science Day on March 24 at Rio Grande University. Winners there can go on to take part in State Science Day on May 12 at The Ohio State University in Columbus.