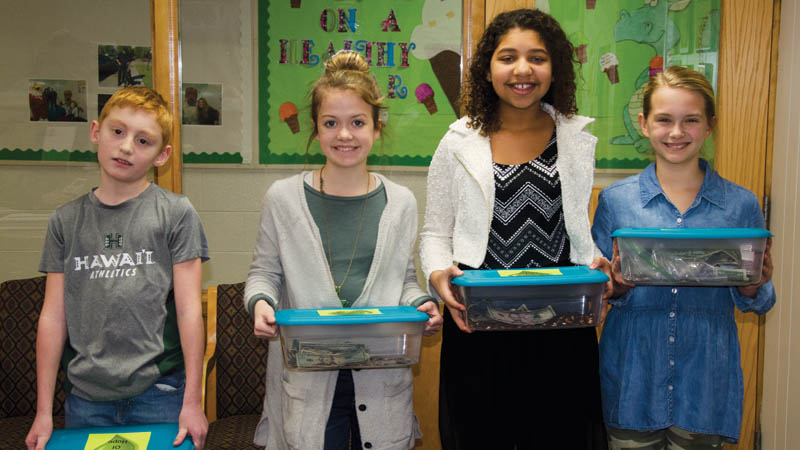 Fairland West Elementary students, from left, Zander McKenzie, Bentley Roland, Morgan Butcher and Taegan Leep, hold buckets containing donations for the Wounded Warrior Project. The students are among the top fundraisers in their school’s drive to collect for the nonprofit group, which aids veterans injured in their service.

ROME TOWNSHIP — For the past week, students at Fairland schools have been collecting donations to help veterans who sustained injuries in their service to the country.

A donation drive has been taking place to benefit the nonprofit Wounded Warrior Project.

“Each of our classrooms has buckets,” Fairland West principal Teresa Johnson said. “We started on Monday.”

Johnson said each of the school’s 15 classes are taking part.

Her school comprises third through fifth grades, and she said Fairland East, which has students from kindergarten through second grade, is also taking part in the drive.

Johnson said the classroom that collects the most funds would get a pizza party and a chance to take part in a kickball game with the high school’s team.

Johnson said one of the fourth grade classes, led by teacher Shawna Leep, will be selling hot chocolate in the cafeteria next week as part of the efforts.

She said the drive has been a great success and students have been able to get donations from friends, families and neighbors.

“We’ve had people bring coins, checks and paper money,” she said of the buckets’ contents. “It’s a worthy cause.”