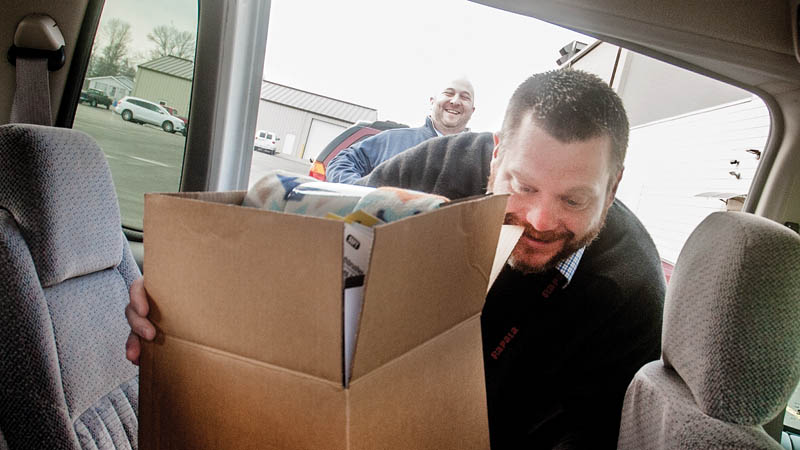 Donated care items to go to help the homeless in need

SOUTH POINT — The Lawrence County Community Action Organization got a sizeable donation of items for a good cause on Thursday, which were the result of efforts by students at South Point Middle School.

“They were putting together care kits for people who are homeless, but they didn’t have the supplies or resources they needed,” Howard said.

He said when he left the meeting, he decided to do some “brainstorming” on ways the school could put something together.

“The middle school principal and guidance counselor jumped right on it,” he said. “They got the school involved.”

Students began collecting hats, gloves and blankets, as well as personal hygiene items, such as soap, toilet paper and toothpaste.

“It was enough to fill up an entire pick-up truck,” Howard said.

Howard said the school has an ongoing relationship with the CAO and wanted to return the favor for help they have received in the past.

“When we have students experiencing homelessness, we’ve been able to get in touch with them and they’ve always been good,” he said. “We wanted to help them out and build on that partnership.”

He said the drive was set to end Thursday when CAO officials were scheduled to meet with the school board to discuss resources. Though this only gave them a few weeks to collect, Howard said students and faculty pulled it off.

“They were really excited to help out,” he said. “We had a quick turnaround.”

Howard said students at the district’s schools have taken part in similar drives in the past, such as collecting peanut butter to benefit a local food pantry.

Cindy Anderson, community development director for the CAO, was one of those at the school board office to receive the donations.

She said the items would be used in the care packages, which are given those the group is trying to find housing for.

“We give them the items while they’re staying in the shelter.

It’s to help them stay healthy and clean,” she said.

She said, once a person has been placed in housing, the CAO gives them another care package.

“It’s a ‘welcome to the new house’ package,” Anderson said.

She said the donated coats and other items would be distributed throughout the winter.

Rock Hill students have also been working on helping the CAO meet needs. The district’s middle school is currently in the middle of a drive to collect hygiene items to be delivered at a future date.