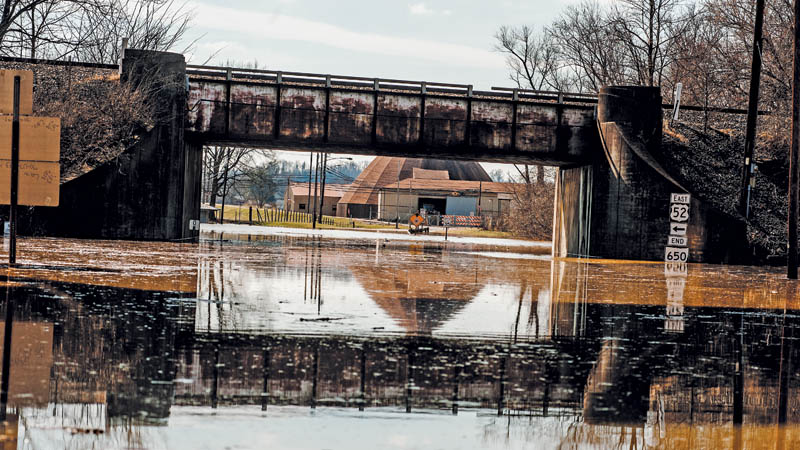 A view of water flooding under the tressle off of State Route 650 in Hamilton Township.

Heavy rain has caused severe flooding along the Ohio River, and numerous areas throughout Lawrence County have seen the rapid rise of water, bringing road closures and restrictions.

U.S. 52 is reduced to one lane at the Rock/McPherson Avenue overpass to allow for traffic entering and exiting the highway where the floodgates have been raised.

Due to the Ironton floodwalls, closures are in place on N. Second Street in downtown Ironton.

Other road closures and restrictions by the Ohio Department of Transportation or the Lawrence County Engineer’s Office due to flooding and high water throughout Lawrence County include:

• State Route 141 is restricted between the 19 and 20-mile markers between Township Road 110 (Zalmon Road) and County Road 4 (Etna-Waterloo Road).

The Ohio Department of Transportation reminds motorists that crossing any closed route is strictly prohibited. Motorists should also avoid traveling on roadways where standing water may be present, although the roadway may remain open.

The Lawrence County Engineer’s Office is also continuing to watch several other roadways.

In Chesapeake, high water was reported near the high and middle schools, where a suspect had jumped into the Ohio River on Sunday night after a stop by police officers.

In Proctorville, Mayor Rick Dunfee said there had been some issues with high water, with part of State Route 7 temporarily underwater.

Dunfee said the road was clear as of Monday afternoon and that officials were hoping the water had reached its highest point.

“We’re in very good shape,” he said, noting the village is, mainly, on high ground.

“We’ve got our flood gates shut and we’re pumping water,” he said.

According to Maura Casey, a meteorologist with the National Weather Service, gauges in the Ohio at Ashland, the closest site to Ironton monitored by the agency, show the river appears to be leveling out.

“It appears to be cresting now,” she said, adding that the river level should drop soon after. “We expect it to be below flood stage by Tuesday evening.”

Casey said the forecast calls for “a wet pattern through the end of the week.”

She said frontal system has formed and is “meandering along the Ohio Valley,” which could lead to heavy precipitation on Wednesday and Thursday, followed by a lull on Friday and then more rain this weekend.

Casey said, while flood forecasts show the water dropping Tuesday, she cautioned that, due to the forecast, people should be cautious and check for further updates.

For additional photos of the flooding, see The Tribune’s Facebook.