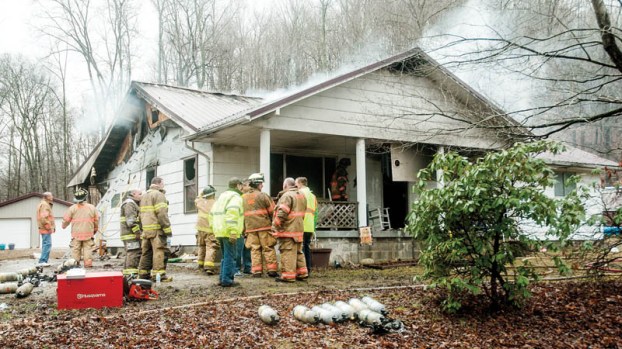 Fire crews from Upper, Coal Grove, Lawrence and Elizabeth Townships were on the scene of a structure fire at 3324 State Route 93 in Upper Township Thursday morning.

UPPER TOWNSHIP — Crews from multiple fire departments battled a blaze at a home in Upper Township on Thursday morning.

The fire, at a home located at 3324 State Route 93, was reported after 9 a.m. and was believed to have started in the attic.

Upper Township’s volunteer fire department was joined by crews from Elizabeth and Lawrence townships in putting out the fire.

Lawrence County EMS and the Ohio State Highway Patrol were also on scene.

An officer from Coal Grove’s police department, who was passing by on his way back to the village, first reported the fire.

No people were injured, but a dog at the residence died as a result of the fire.