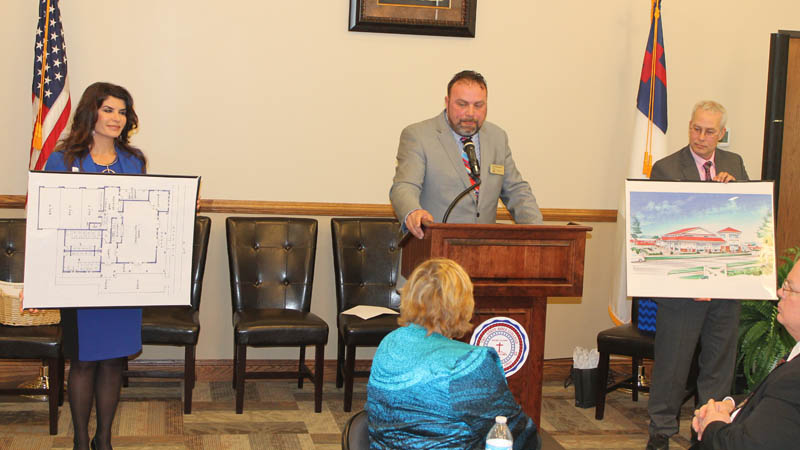 The Lawrence County commissioners were the guest speakers at the county chamber of commerce’s Fourth Friday luncheon Friday at Tri-State Bible College.

The three Lawrence County commissioners served as the guest speakers, and spoke about everything that they have accomplished over the past year, as well as what they have planned for 2018 and beyond.

Commissioner DeAnna Holliday spoke about the success of the Lawrence County Land Bank, the purchase of the new 911/EMA building in Coal Grove earlier this year and congratulated common pleas judge Andy Ballard on recently receiving the initial certification for a drug court.

Commission Vice President Freddie Hayes Jr. spoke about the plans for a new senior center, EMS station and community room currently in the works for the Lawrence County Fairgrounds, which he said he is “99 percent sure” will happen.

Hayes, who was first appointed as commissioner in 2012 and then re-elected in 2013, said he has always been involved with the growth of economic development, senior citizen programs and facilities and the annual fair in Lawrence County.

Commission President Bill Pratt talked last about the job of the commissioners, and the struggles that they often have to work through on a daily basis.

Pratt is the owner of Pratt’s Dairy Farm, and is the only dairy farmer left in Lawrence County.

Also in attendance at the luncheon were Ohio State Sen. Joe Uecker (R-14) and his wife.

The next chamber of commerce Fourth Friday Luncheon will take place at noon, Friday, March 23 at the Wyngate at RiversEdge in Proctorville.

U.S. Rep. Bill Johnson, R-Ohio, is scheduled to be the guest speaker.