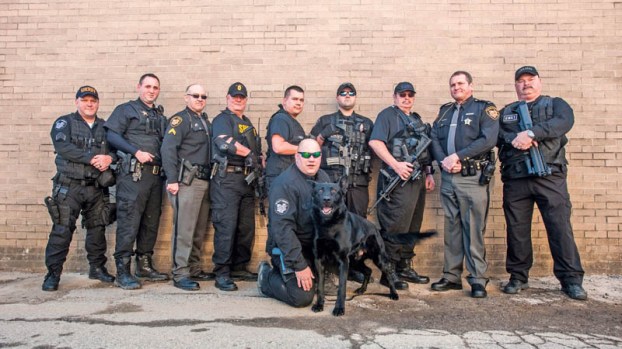 Every community has its heroes who rise to the occasion in a crisis. In 2017, the Lawrence County Sheriff’s Office had to deal with the type of tragedy no law agency wants to deal with — the murder of four family members and the alleged killer still on the loose.

But that is what the sheriff’s office had to deal with last October 12 after the 911 Center got a call from a Decatur Township man that he had come home from work to find his wife and her parents dead in his home and that he had been injured by a man with a knife who had been in the house at 15497 State Route 93.

When officers arrived on the scene, they found Donald McGuire, 50, his wife, Tammie L. McGuire, 43, and her daughter, Stacie M. Jackson, 24, dead from gunshot wounds. Jackson’s son, Devin Holston, 8, was missing and an alert was sent out to the community. People then searched the surrounding woods for the boy.

He was later found dead in the house, hidden behind a dresser.

It was the beginning of a two-day manhunt for the suspect, Arron Lee Lawson, 23, of Pedro, who was a friend of the family.

Officers from the Lawrence County Sheriff’s Office set up a command post at the Upper Township Fire Department building to search the nearby woods for Lawson. As word got out about the tragedy, law agencies from around the region called in and offered their assistance.

For two days, there were some 100 officers from several agencies,  including West Virginia State Police and the Butler County Sheriff’s Office, which sent helicopters.

Lawson was captured on County Road 52 after a tip from a citizen who lived on that road saw Lawson and got into contact with the Lawrence County Sheriff’s Office and the officer who was patrolling that area. Lawson did not flee and willingly gave himself up.

“We are not pleased about the conditions of why we are here or the conditions that we had to arrest him for. But we are pleased that we have made Lawrence County safer by getting him off the streets.”

The Rock Hill Athletic Boosters and Rock Hill Football Moms collected donations, under a balloon reading “DevinStrong,” to help the family pay for the funerals.

Rock Hill superintendent Wes Hairston said the second grader was a well-liked young man and it was difficult for students at the school to grapple with the loss.

He praised all the officers who had helped to keep the community safe.

“I’m proud of the job law enforcement and other agencies have done,” he said.