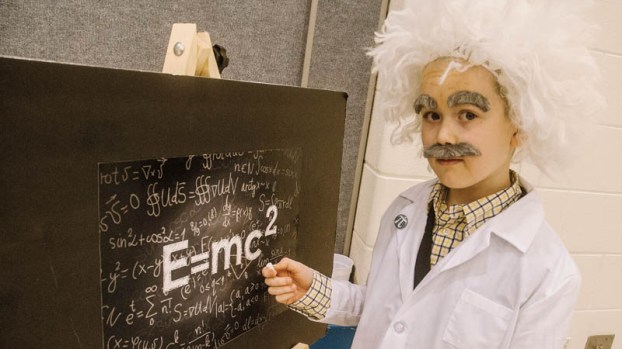 BURLINGTON — Figures from arts, science, activism and more were honored on Tuesday at the annual wax museum event at Burlington Elementary.

Matney said the students then researched their choice, wrote a report, then came up with a costume to depict them.

She said the exhibit, which first took place at the school last year, was on display throughout the school day, giving each grade a chance to come by and see the students “strike a pose” as the groups walked through.

“Because I like Mickey Mouse,” he said of the reason for his choice.

He said he chose the Mercury 7 astronaut because of his interest in space travel.

Addison Tollison was the first “statue” to greet visitors at the entrance.

“I’m Cleopatra,” she said, explaining that she bought her costume for the event.

Matney said one of the students, Amiyah Moore, had chosen to be a Harlem Globetrotter, but, after  she had got her costume, including a signed jersey, together, her family suffered the loss of their home in a fire.

“She was upset about her costume,” Matney said.

But she said the girl got a nice surprise, shortly after, when, after receiving word of Moore’s problem, the Globetrotters overnighted a new jersey to the school for her to wear.

Some had props to go with their costumes, such as Aiden Matney, who had a plane to go with his depiction of one of the Wright Brothers.

He said he chose the flight pioneers from a list of possibilities presented by his teachers and that he had learned a lot about his subject.

Following the school day, the exhibit reopened in the evening, giving parents and a community the chance to walk through.

“It’s vital to teach our students that, no matter their circumstances, they too can achieve greatness, just as the historians they have chosen to bring to life,” the teachers said in promotional materials of the importance of the exhibit. “Like each student, these influential figures were also once merely children with big dreams of changing the world.”