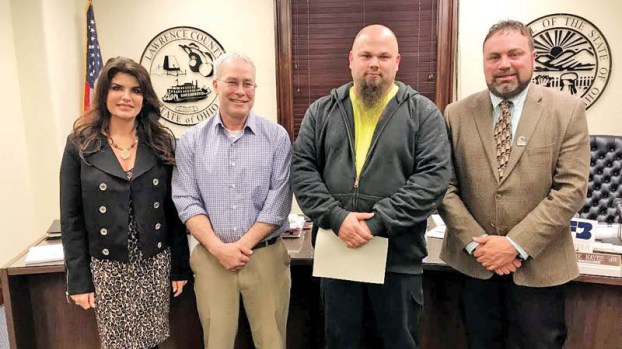 Union Rome Sewer worker Jarod Leffingwell was recognized by the Lawrence County Commission on Thursday for saving the life of a co-worker, who had fallen head first into a grinder station in January. Pictured left to right is DeAnna Holliday, Bill Pratt, Jarod Leffingwell and Freddie Hayes Jr.

Union Rome Sewer (URS) worker Jarod Leffingwell was recognized by the Lawrence County Commission Thursday for saving the life of a co-worker after an accident occurred in January.

“On Jan. 11, 2018, you were involved in an incident where a co-worker sustained injuries after falling head first into a grinder station. Your co-worker was hanging by the tips of his boots and struggling to get himself out of water,” a letter to Leffingwell from the commission states. “You grabbed him by his legs, and with great effort on your part, pulled him up and out of the grinder station. The injuries your co-worker sustained were minor, but the fact is, if you hadn’t been there to help him, he would have drowned.”

Leffingwell, who has been working for URS for about a year and a half, said that he “was at the right place at the right time,” regarding the incident.

“I feel like I was put there for a reason,” he said.

Lisa Pine, URS assistant administrator, said that Leffingwell has been one of the best URS employees, adding that he is very dedicated and a quick learner. She also said that having two workers work in a grinder station is required from this point on.

“We appreciate and thank you very much for your efforts that day, and are proud to have employees like you working for Lawrence County,” Leffingwell’s letter from the commission stated.

During the commissioners reports, all three of the commissioners talked about the Ohio Capital Bill which was recently introduced at the state level and includes $1 million for Lawrence County for the purpose of the new senior citizens center, EMS station and community room at the county fairgrounds.

“It’s got to be voted on by the state congress and the senate and signed by the governor, but State Rep. Ryan Smith and Sen. Bob Peterson assured me that we should be fine with that,” Commission Vice President Freddie Hayes Jr. said. “I think that’s going to be a great thing for Lawrence County, and it shows what we’ve done here.”

Hayes also added that there are a couple other good projects coming this year that the commission is excited about as well.

• Approved and signed a Proclamation State of Emergency for Lawrence County.

• Requested approval of an inter-county trade of funds between the Lawrence County Department of Job and Family Services (DJFS) and the Gallia County DJFS, as requested by Terry Porter, LCDJFS director.

• Approved the Memorandum of Understanding between LCDJFS Public Children Services Agency and the Ironton-Lawrence County Community Action Organization (CAO). The MOU will allow both parties to work together and collaborate with one another to plan and implement the Ohio START Program.

• Received and filed the Ohio Department of Transportation’s annual highway mileage certification for Lawrence County. The current mileage maintained by the county as of Dec. 31, 2017 is 376.009 miles.

• Signed the Certificate of Appreciation for Dr. Kurt Hoffman for his years of service as Lawrence County Coroner.

• Approved the Out of County Contract for Monroe County Jail. The cost per day per bed is $65, pending the approval of the prosecutor.

• Approved a resolution to ask the county prosecutor to collect unpaid rents at the Lawrence County Airpark.