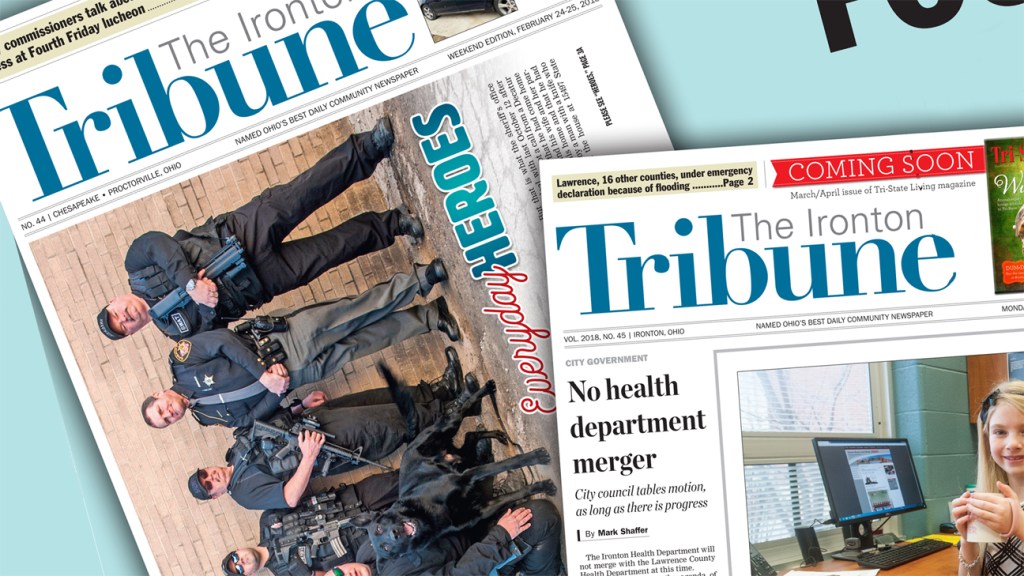 Readers of The Tribune may have noticed some changes in the paper and its offerings in recent months, some instantly visible, while others more subtle.
“Some of the changes have been just bringing a more local focus,” Scott Schmeltzer, who has been publisher of the paper since October, said. “We’re focusing on local schools, local businesses and we’re trying to get more local leaders in the paper.”

He said the focus on becoming more local would cover a range of areas.

“We also have been big supporters of the sheriff, police and fire personnel in the county. We want a steady focus on our everyday heroes. Teachers, nurses and first responders deserve our support and coverage.”

And he hopes that local faculty and teachers reach out to him and help to get their schools covered.

“We can’t be everywhere, but we’re certainly going to try to cover it,” he said.

Schmeltzer said he is especially interested in ways to get local figures to contribute to the paper, such as writing informational columns.

“We’d like them to become part of our media team,” Schmeltzer said.

While The Tribune has always thoroughly covered local sports, Schmeltzer said the focus on schools would not be limited to just that.

Visual changes
Schmeltzer said the most noticeable change is in the paper’s appearance, beginning with an update of the masthead, which had not been done in several decades.

“We have color and we’re utilizing it,” he said.

And the design of the front page has put a stronger focus on design as well.

“You’ll notice the new design,” he said. “It’s bigger and bolder photography, with a local focus. We want that focus on schools, kids and local families.”

Special publications
Schmeltzer pointed to February’s publication of the Tribune’s annual Profile edition as an example of further design changes.
The full-color, glossy magazine had a theme of “Everyday Heroes.”
“We wanted to further put the focus on heroes, like the Girl Scouts, Rotarians, Elks  and the Knights of Columbus.”
The Tribune also publishes the bi-monthly Tri-State Living magazine, which Schmeltzer said has been a major success.
“We want to maintain that and reach out to more people for stories,” he said, adding that local writers and photographers are always sought for content.
Community input
Schmeltzer said one of the initiatives undertaken recently at the paper is the formation of a reader’s board, which hosted its first meeting on Tuesday.
“We just started and we’ll be adding members,” he said. “We’d like to have everyone, from high school to retirement age.”
He said the chief goal of the board is for the public to have an opportunity to let The Tribune know what they want to see in the paper.
“It’s very important to us for how we cover things,” he said.
In addition to print, he points out that the paper also reaches readers through its website and social media.
“Every age group is reading our product,” Schmeltzer said. “Our readers are our guiding light.”
He said those interested in being members of the readers board can contact him at scott.schmeltzer@irontontribune.com

Celebrating accomplishments
Schmeltzer pointed to successes The Tribune has had in recent months, such as being nominated as top three finalists for six awards from the Associated Press, for editorial writing, design, photography and spot reporting. Final winners will be announced later this month.

“The internal team we have here is fantastic,” he said. “They’re full of life and want to get the best product out.”

He said they have adapted to the changes in coverage and format well.

“I’m pleased with their approach, as we offer new ideas,” he said. “Change is never easy, but, sometimes, it’s needed.”

He also thanked those who support the paper, from subscribers, of which he said there has been an increase over the last few months, to advertisers.

“None of this could be possible without the community and the input of our customers,” he said.