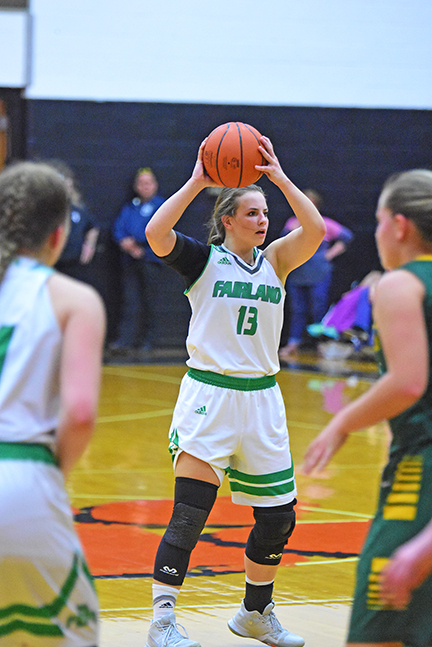 PROCTORVILLE — The Berlin Hiland Lady Hawks are back in the regional tournament, but this time they are taking a step up.
The Lady Hawks were in Division IV last season when they captured the state championship. They are back in the regionals this time in Division III and will play the Fairland Lady Dragons at 8 p.m. in the semifinals on Wednesday at Marietta College.
Hiland (22-4) has three members of the starting lineup returning from last year’s state championship team.
Back are 5-foot-9 senior guard Morgan McMillen, 5-6 senior guard Kennedy Schlabach and 6-2 junior forward Tiffany Weaver.
The trio are joined in the starting lineup by5-11 freshman Zoe Miller and 6-foot freshman Kelsey Swihart.
Also, back from last year’s team are 5-7 senior guard Sara Keim, 5-9 sophomore Kim Miller 5-9 sophomore Kendra Shetler, 5-5 sophomore Krista Troyer and 5-9 sophomore Madison Yoder.
Berlin Hiland polished off Sugarcreek Garaway 63-41 in their regional championship game as McMillen scored 22 points, Miller 15, Weaver 14 and Schlabach 10.
McMillan scored the 1,000th point of her career earlier this season. She has signed with Bowling Green while Schlabach has signed to play at Ohio Dominican.
Hiland head coach Dave Schlabach is in his 27th season and has a career record of 607-93.
Last season at the state tournament, Schalabach had 15 points and McMillen 11 in the 44-41 semifinal win over Ottoville. The Lady Hawks routed Waterford 61-41 in the state title game as McMillen had 17 points.
Hiland was led by Angela Troyer with 20 points in the finals and 18 in the semifinals. Troyer was a senior last season.
Fairland (23-2) is fresh off a 57-41 win over North Adams in the district title game. This marks the program’s seventh 20-win season under head coach Jon Buchanan.
Fairland is led by 5-5 senior guard Emily Chapman who has eclipsed the 1,000-point career mark. The Cedarville College signee is averaging 19.7 points, 5.7 assists and 4.1 steals a game and she scored 33 points in the win over North Adams.
Besides Chapman, the Lady Dragons will start 6-foot senior Taylar Wilson, 6-foot junior Allie Marshall, 5-8 junior Kelsie Warnock and 5-5 sophomore Harlie Lyons.
Off the bench the Lady Dragons get help from 5-4 junior Brittney Thompson and5-5 sophomore Jenna Stone.
Fairland will again be without starting center Alesha Simpson. The 6-foot senior is out with a knee injury.
Marshall is second on the team with a 10.9 scoring average and 5.9 rebounds. She teams with Wilson to give Fairland a strong rebounding duo.
Chapman, Warnock and Lyons are all good 3-point shooters.
This year’s regional site has been moved from Logan to Marietta College due to the Logan’s boys’ home tournament basketball game on Wednesday.

NEW YORK (AP) — Big Ten teams have a longer layoff than they are accustomed to heading into the NCAA... read more