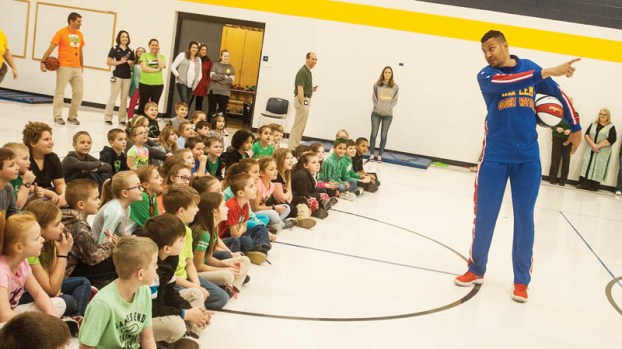 BURLINGTON — Second grader Amiyah Moore is a big fan of the Harlem Globetrotters.

So much so, that, when her class at Burlington Elementary dressed as historical characters and prominent figures for the school’s annual wax museum exhibit last week, she chose to portray one of her heroes, Brianna “Hoops” Green, who joined the Globetrotters in 2017 as the 15th woman to be a member of the team.

Her costume for the exhibit was ready to go, including her prized jersey, signed by Green.

However, she did not get a chance to wear it, as, unfortunately, a few weeks ago, a fire destroyed her family’s home, wiping out all that they had.

Knowing the difficulty the family was going through and what the loss meant to Moore, the school contacted the team and told them about the fire. In response, the Globetrotters overnighted a new jersey to Moore, with it arriving in time for her to wear it in the exhibit.

But the kindness of the team did not stop there.

On Friday, Moore was treated to another surprise, as the second grade was taken into the school’s gymnasium.

Once the children were assembled, faculty brought in Orlando “El Gato” Melendez, the power forward for the Globetrotters, who was in the area in advance of the team’s appearance at the Big Sandy Superstore Arena in Huntington, set for Wednesday.

Melendez, 39, is the first Puerto Rican to play for the team and he told the children of growing up, playing basketball on a court miles from his home. He acquired his nickname, Spanish for “The Cat,” after he followed a herd of strays through the sugarcane fields to get to the courts. The cats would continue to show up with him every day, as he used the shortcut through the fields, and the name stuck.

Melendez, who, at 6’8”, towered above the children, told them he “grew fast” and kept playing at the sport.

Through an exchange program, he eventually played in North Carolina during high school, then went on to play for the Tarheels at the University of North Carolina.

He told the students about the history of the Globetrotters, who he said formed in 1926 with all black players at a time when professional sports were all white.

After Melendez had made his presentation, he then informed the children he was there to see Moore and called her to the front.

He told her that he had seen photos of her from the wax museum and complimented her portrayal, re-enacting her pose for the crowd.

“You did a really cool thing,” he said. “You look a little like Hoops, too.”

Melendez then presented Moore with four tickets so she and her family could come to the game in Huntington. He then had her raise her hand, so that he could teach her  the team’s signature ball spinning on her finger.

Giving Moore a hug, he thanked all of the students for being supportive of Moore after the fire.

“You work so hard for your things and you lose them so fast. It’s tough,” he said. “Thanks for being there for her.”

Melendez then ended the assembly, dunking a ball, to cheers from the children.

Mary Matney, Moore’s teacher, was moved by the visit. She said she was happy for Moore and that school wanted to see some joy brought to her.

“After going through something so devastating,” she said. “As a teacher, we take a great responsibility for all of these students, and it’s not just during the school day.”

Afterward, Melendez spoke of meeting Moore. He said “it’s a blessing” to be able to represent the team both nationally and internationally and that meeting the communities they visit and getting a chance to help is especially meaningful for him.

“It just feels your heart and makes you love even more,” he said.