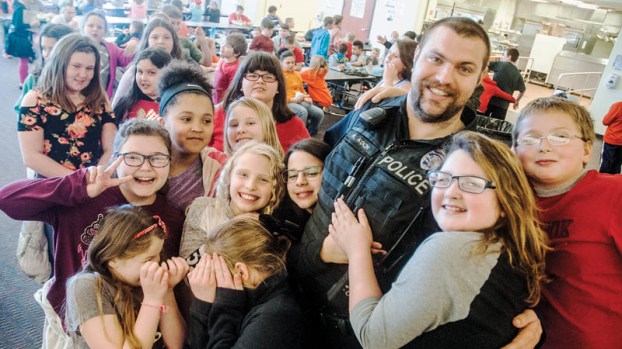 Ironton schools are losing their long-time police officer, Adam Koch, after five years. He is turning his badge in to become a long-haul trucker.

The elementary and middle schools marked his departure with a cake and lots of hugs from the students, staff and volunteers during lunch period in the cafeteria.

Koch worked the school detail and on road patrol.

“I enjoyed coming down to the school and working with the kids and the teachers and the staff. I really enjoy it,” he said. “I love it here.”

He said it was a tough decision to leave the school and the police force.

“It’s hard working road patrol,” he said. “I’ll miss being at the school period, I enjoyed being here all days with the kids.”

He said that he appreciates the opportunities he has had.

“I’ve learned a lot over five years. The city of Ironton has been great to me. I greatly appreciate everything, but it hasn’t been easy. I’ll miss the kids a lot. I’ll miss the guys and gals on the police force.”

And the kids will miss him too. Before they headed back to class, a bunch of elementary students gathered around him to say goodbye and give him a hug. At least one gave him a handmade card that said he would be missed.

Kenley Neal, a fourth grader, was one of the gathered students.

“We’re very saddened. We like our cop Adam,” she said. “He’s good with the kids and always there to help them, very friendly. From day one, he’s been a good to have here with the kids and with the staff. We’ll miss him, but he has to do what makes him happy.”

Addie Delong, a fourth grader, was sad too.

Aaliyah McFann, also a fourth grader, said she’d miss him because not only does she see him at school, he helped out when she was in two different car accidents.

Ironton Police Chief Pam Wagner said the department would miss him too.

“He’s been an outstanding officer,” she said. “He’s very popular and a hardworking officer. We hate to lose him.”

The Ironton Police Department has identified the woman hit by a train on Tuesday night. According to Detective Joe Ross,... read more