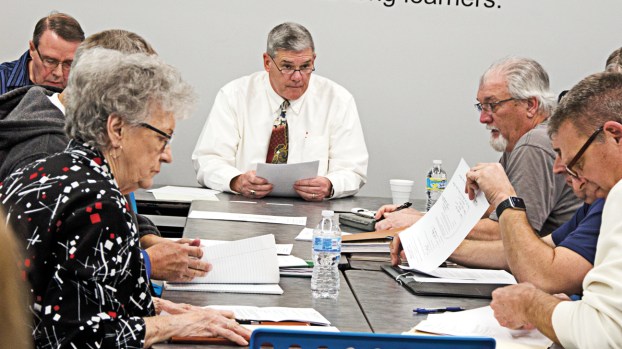 SOUTH POINT — The village of South Point will be making video recordings of its monthly meetings available starting later this year.

The council, which met Tuesday at the STEM+M Early College High School on Solida Road, voted to begin the process, which will start when the new school year begins in the fall.

Council member Chris Smith provided the council with a few possible options for the video recordings.

They agreed to go with a proposal from Amy Frazier, of Bullseye Media, who would provide the equipment for the video recording, which will be conducted by students of the STEM+M school.

Smith said this option would come at “no cost” to the village. The recordings could then be broadcast on Armstrong Cable.

“Once it’s recorded, we could put it wherever we want,” Smith said.

He said livestreaming was a possibility, however this would require creating and maintaining a village Facebook page. For now, the council is going with the option of Armstrong.

Smith said he had inquired with South Point schools, but there were not available students to do the sessions, and he had spoken with Jayshree Shah, the director of the STEM+M school about the idea.

Shah said students at the school, which is a public school independent from the South Point district, are studying digital marketing and video and would be available for the project.

Lawrence County Auditor Jason Stephens was in attendance at the council meeting, where he gave an overview of property sales in South Point.

“It’s staying about the same each year,” he said, noting the auditor’s office looks at the amounts on a three-year schedule. “In other areas, it’s going up and down on different things.”

• Did a first reading on an ordinance to extend the sanitation agreement with Republic Services. Monthly residential billing services would be amended from $9.40 to $10.40 a month under this plan.

The council first voted on passing the ordinance by suspending the three reading rule, which failed, due to member Bill Patrick opposing.

• Voted to give $3,500 to People for the Point for the Independence Day fireworks display.

• Heard from a resident on North Kenova Road, who expressed concerns about trucks from a local business exceeding the weight limits on the road and driving across the edge of his yard.

• Mayor Jeff Gaskin said a weight limit sign would be posted, and that police Chief Chris Mahjer would “get on it.”

Gaskin pointed out that the trucks may be driving over the easement, rather than the resident’s yard, but said, this would also not be acceptable.

“It’s our easement that you take care of and we thank you,” he said.

The resident said he had placed orange markers on the grass, which had been knocked over by the trucks. Mahjer acknowledged seeing that the markers were down.

• Heard from a resident expressing concerns about people parking into the street on Ninth and Dean streets. She said the cars were obstructing the view around a corner. Gaskin said signs would be posted and a police would start citing offenders, beginning Wednesday.

• Got an update from village solicitor Randy lambert on efforts to demolish the Otter Property on North Kenova Road. Lambert said the  deed had been delivered to the county’s land bank, who would hold it until the title is searched and hear back on an amended order from a bankruptcy court. He said he expects progress on this to be made by the end of he month, at which point the land bank can begin plans for tearing down the building.

• Voted to hire two firefighters for the village’s fire department.

• Got an update from Gaskin on overdue sewage bills. The mayor said 243 letters have been mailed to those who are more than 60 days past due. He said 144 people have paid, totaling $32,000, while 57 have signed payment plans.

He said service has been cut off for a dozen accounts, with four cutoffs scheduled.

He said, in some cases, accounts have been paid after crews start digging.

“When they see the backhoe coming, they find the money,” Gaskin said.

HUNTINGTON — Choices: The Movie, which was filmed in and around Huntington, West Virginia, will have its local premiere in... read more