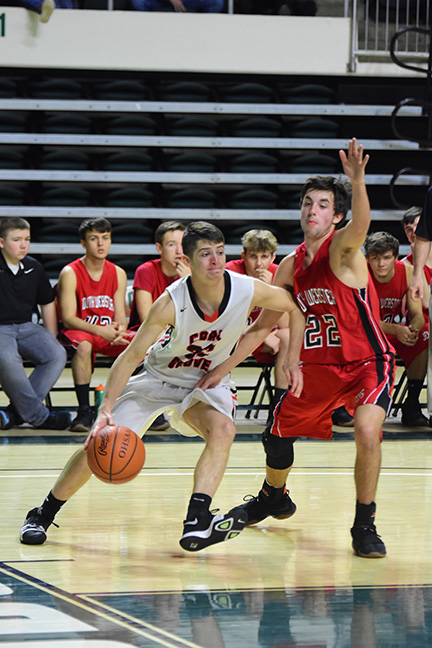 ATHENS — The Coal Grove Hornets are hoping that trip No. 2 to the Ohio University Convocation Center this season will mean trip No. 1 to Columbus.
The Hornets won the program’s second district championship on Saturday with a 61-39 rout of South Webster. Next up is the Division IV regional semifinals as the Hornets face the Peebles Indians.
Coal Grove is 19-5 and Peebles is 20-5 on the season. The two teams will play at 8 p.m. on Tuesday after the 6:15 p.m. first game between Berlin Hiland (21-5) and Lancaster Fairfield Christian (12-14).
“They have three really good guards. They shoot it really well,” said Hornets’ coach Kevin Vanderhoof.
“If we can defend them and not let all three get 15 or 20, we’ll be okay. But we can’t let them all go off for 20.”
The top scoring guard for the Indians is 6-foot senior Tanner Arey who averages 22.6 points a game. He is a four-year starter. He was a first team all-district selection.
On the all-district second team was 6-1 senior Bostin Robinson who averages 18.5 points a game and special mention all-district selection was 5-8 sophomore point guard Weston Browning who had 21 points and seven assists in the Indians 75-56 win over Green in the district finals last Saturday.
Peebles also starts 5-10 senior Conner Browning and 6-5 senior center Blake Hawes.
Conner Browning is capable of hitting the 3-pointer and Hawes is a strong rebounder who can also score.
Coal Grove is paced by the one-two tandem of 6-4 senior Sam Angelo and 6-1 junior Aaron Music.
An excellent defender, Angelo averaged 11.0 points and 7.0 rebounds a game while Music scored at an 11.5 clip and had 8.0 rebounds.
The Hornets’ 6-4 senior center Jeb Jones averages 8.0 points and 7.5 rebounds a game to earn third team honors.
Joining the trio in the starting lineup is 5-10 sophomore Cory Borders who is a deadly 3-point sharp shooter and the versatile 6-foot senior Jordan Case.
Coming off the bench are 6-2 senior Alijah Roman, 5-10 junior Jalen McKenzie and 6-2 junior Nate Harmon.
“Our three off the bench is very productive. I think we’ve got more depth,” said Vanderhoof.
“But they’re definitely the best team we’ve played (in the tournament). We have to play defense and we have to keep them off the boards.”
Tuesday’s winners advance to the regional championship game at 7 p.m. on Friday at the Convocation Center.
The regional champion will play in the state semifinals at 10:45 a.m. on Thursday, March 22, against the Region 15 champion.
The state finals are at 10:45 a.m. on Saturday, March 24.

Jim Walker jim.walker@irontontribune.com COLUMBUS — The Great Eight. A total of eight area girls were named on Monday to the... read more