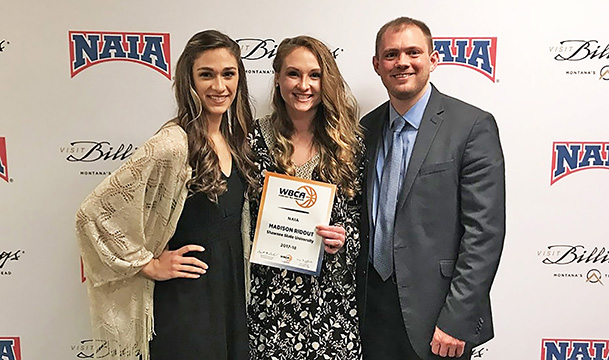 BILLINGS, MT — And the awards just keep coming for Hannah Miller.
A Mid-South Conference selection on the all-league team as a player and for academics, the Shawnee State Bears 5-foot-10 junior guard added All-American to her trophy case.
The former All-Ohio standout for the St. Joseph Female Flyers, Miller was named a Women’s Basketball Coaches Association NAIA Division I honorable mention All-American on Wednesday.
Teammate Madison Ridout was named first team All-American and SSU’s Jeff Nickel was selected the WBCA Regional Coach of the Year.
Miller is third in scoring for SSU, averaging 14.4 points per game while starting in all 33 games after being a backup her first two seasons.
Miller increased her minutes per game from 16.2 per game to 33.7.
Ridout has started all 33 games so far for Shawnee State and has led the Bears to a 30-3 record. Ridout has averaged 14.6 points and 7.3 rebounds per game, both team highs.
Ridout — who played at Jackson — was named first team All-Mid-South Conference two weeks ago.
Nickel was named Regional Coach of the Year for Shawnee State’s region. Now in his fifth season, Nickel led Shawnee State to a 30-3 record and to both the MSC regular season and tournament championships.
The Bears won the regular season for the third year in a row and the conference tournament for the fourth, all under Nickel’s leadership.
Shawnee State women’s basketball begin their march toward a National Championship on Thursday night, when they take on Grand View in the first round of the NAIA Division I Women’s Basketball National Tournament, presented by Wells Fargo. Tip-off is 8:15 pm EST.