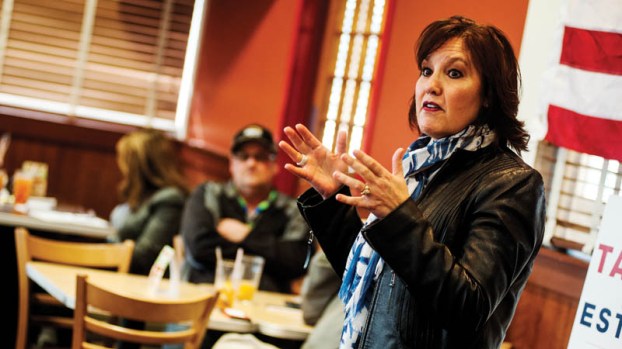 Lt. Gov. Mary Taylor speaks to area residents, Tuesday, for her candidacy for Governor of Ohio.

“I fear that our current Republican Party has been too willing to just get along and work with the other side,” she said. “But I’m an unapologetic conservative who is not afraid to take on the establishment and status quo to bring conservative values back to Ohio.”

Taylor talked about her plans for the governor’s office, if elected, which include ending Medicaid expansion in the state, ending common core in schools to bring the necessary skills and training for both those who want to attend college after high school and those who want to directly enter into the workforce, standing with President Donald Trump on the Mexican border wall and securing the nation’s borders, continuing with tax reform and shutting down sanctuary cities.

Taylor takes pride in having helped restore conservative governance in Ohio, never losing a campaign, winning her first legislative race in a deep “blue” district and being the only Republican to win statewide in 2006, which was a landslide Democratic election year.

Taylor’s running mate, Nathan Estruth, who is running for Lieutenantgovernor, was also in attendance, and spoke about his background and what it means to have the opportunity to run alongside Taylor in the race.

Estruth recently stepped away from his job at Proctor and Gamble after 27 years to run for Lieutenant Governor alongside Taylor, and said Taylor’s conservative background and record made his choice to run a lot easier.

Estruth also spoke about IMFLUX, Inc., a plastic injection molding service company, which he was instrumental in starting up in Hamilton four years ago.

He also added that during that time, more than 150 people were hired at the location.

“It is possible to bring jobs and manufacturing back to Ohio,” he said.

Running against Taylor in the Republican primary on May 8 is Ohio Attorney General Mike DeWine.

On the Democratic side, Richard Cordray, former director of the Consumer Financial Protection Bureau and former Ohio attorney general, Larry Early, former candidate for governor in 2014, Dennis Kucinich, former U.S. representative, former Cleveland mayor and former presidential candidate in 2004 and 2008, Bill O’Neill, Ohio Supreme Court justice and former nominee for Ohio-14 in 2008 and 2010, Joe Schiavoni, state senator and former minority leader of the Ohio Senate, and Paul Ray will all be on the primary ballot.