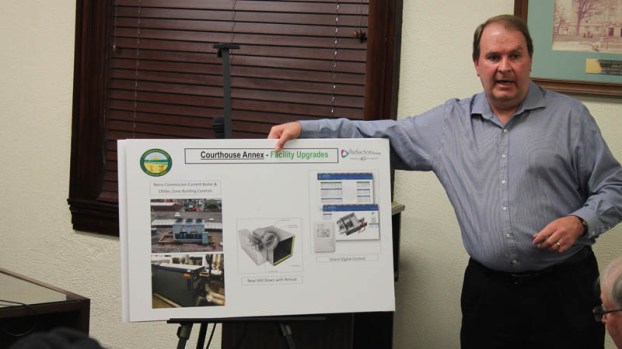 Dave Blevins, with the Perfection Group, talks about upcoming renovations to the Lawrence County Courthouse Thursday at the county commission meeting.

The Perfection Group in Cincinnati hired to complete job

Although the exact dollar figures have yet to be finalized, the Lawrence County Commission announced on Thursday that renovations would be done to the courthouse beginning sometime this year.

The Perfection Group, based out of Cincinnati, will perform the updates and had representatives at the commission meeting to talk about the project.

“We’re a design, build, engineering contractor, which means that not only do we design and build things, and engineer things, but we can take a building from its start and build it, we can service it through its life cycle and then we can renovate it at the end,” Tony Apro, with the Perfection Group, said. “We really only focus on the sustainability portion with counties and city governments. That’s our specialty.”

The group has been in contact with Lawrence County since September 2015, and prior to the request for proposal (RFP), completed a comprehensive infrastructure analysis on the courthouse building to determine the areas of need and solutions.
The company also uses energy-efficient options in order to save money.

Some of the big areas that are going to be addressed include the current manual temperature controls, inefficient lighting, the failing rubber roof of the old courthouse building, aged and failing coils, hazardous concrete walkways, masonry in need of repair and more.

Specifically in the annex part of the building, the elevator is very old and in need of replacing, radiant heating used is aged, and sections of the EPDM roof need replaced.

All mentioned above would be part of the project, and new energy-efficient LED lights would be installed inside and out, a new ventilation system with updated controls would be put in, the roof of the entire building would be replaced and the dome on top of the courthouse would be restored to its original copper color, just to name a few.

The money for the project will come from the one-time $4 million in funds from the state, which was given as a way to counteract the loss of Medicaid Managed Care Organization (MCO) sales tax, in which Lawrence County previously received around $1.4 million in revenue from each year.

Commission President Bill Pratt credited the current make up of Lawrence County’s government in being able to move forward with projects to improve the county, stating that a good balance of Democrats and Republicans in office is what’s needed to make good, sound decisions.

• Received and filed the monthly EMS Report for February.

• Received and filed the Amended Certificate of Estimated Resources for 2018 from the Budget Commission.

• Approved and signed the Title IV-D Child Support Contract with the Lawrence County Common Pleas Court, with a term from Jan. 1, 2018 through Dec. 31, 2018.

• Approved and signed the ODOT Local-Let Agreement for PID Law cr15-cr18-0.00/0.00 Resurfacing Project and adopted a motion to authorize the county engineer to enter into an agreement with ODOT for the resurfacing project on behalf of the county.

• Approved a resolution to award the Law Cr42-0.10 Landslide Repair Project to Allard Excavation, LLC, and enter into contracts after funds are encumbered. The award amount price is $168,862.06.

• Reimbursed Jane L. Morse from the Dog and Kennel Fund for her animals that were killed by wild dogs.

• Met in executive session with Chris Kline and the EMS administrators regarding personnel; hire, fire, reprimand. No action was taken.

WWII veteran to be presented with French Legion of Honor

OLIVE HILL, Ky. — A Carter County veteran, who served in World War II from the Normandy landing until the... read more