WWII veteran to be presented with French Legion of Honor 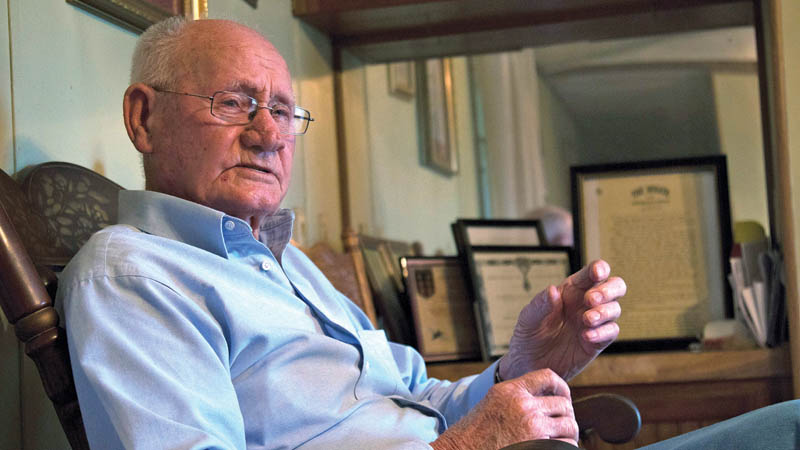 Jack Baker, 98, of Carter County, Kentucky, will be formally presented with the French Legion of Honor on Wednesday, honoring him for his service in the European theatre of World War II.

OLIVE HILL, Ky. — A Carter County veteran, who served in World War II from the Normandy landing until the conflict’s end will be formally presented with a prestigious honor on Wednesday.

Following Nazi Germany’s surrender, Baker was set to enter the conflict in the Pacific against Imperial Japan.

“He was being loaded onto a boat to head out when Japan surrendered,” Kirsten Hampton, public affairs speechwriter for the First Army, based in Rock Island, Illinois, said.

For his service in the conflict, Baker was the recipient of five Bronze Stars, the World War II Victory Medal, the European-African Middle Eastern campaign Medal, the Army God Conduct Medal and the Army marksmanship badge for his WWII service.

He never sustained a major injury in combat, despite an error that pushed him forward into the fight without even attending boot camp.

Baker was one of the first U.S. troops to enter Paris as France was liberated from Hitler’s Germany.

And last summer, that nation’s government honored him for his heroism, approving him for their highest military award, the French Legion of Honor.

Hampton said Baker has not been formally presented with the award and, as part of the First Army’s 100th anniversary observances this year, he will be receive the honor on Wednesday.

Top generals of the First Army, along with representatives of the French government, will travel to Olive Hill, where Baker will be presented the Legion of Honor at a ceremony at the old Olive Hill High School.

First Army Commanding General, Lt. Gen. Stephen M. Twitty, First Army Command Sgt. Major Richard Johnson, will meet privately with Mr. Baker at 12:30 p.m. on March 21 at the historic 1920s-era high school, located at 120 Comet Drive. Then, the community, along with state and local officials and more than 100 JROTC and ROTC cadets from surrounding high schools and Kentucky universities, will also be in attendance to honor Mr. Baker with a public event beginning at 1 p.m.

“I’m surprised anyone would want to pay any attention to me,” Baker said of the honor in a news release. “I just did what my country asked then came home and got back to my life.”

Following the war, Baker returned home to his wife, and worked for decades as a carpenter. The couple raised three children and their grandson serves as an Air Force historian.

Baker still walks several miles a week and fishes regularly. Two years ago, he was honored for his service by the Kentucky General Assembly, as well as being named “an expert angler” and a “fixture among the waters of Tygart Creek,” where he caught his first muskie in 1950. The resolution states Baker and his white pickup are well-known to residents, and he is often seen parked by the creek near the entrance to Carter Caves State Resort Park.

Hampton said as part of the First Army’s anniversary, they were making an effort to reach out to World War II veterans and other past soldiers of the field army.

“He has a wonderful story,” she said. “And we worked with the French government on this.”

She noted that the story has special significance for Lt. Gen. Twitty, an African American, who is descended from two grandfathers who served in the segregated units of the First Army in the European theatre of World War II.

The First Army, America’s first and longest serving field army, was established as America entered World War I and played major roles in both world wars. In conjunction with the unit’s 100th birthday on Aug. 10, First Army has been celebrating this centennial with events paying tribute to outstanding soldiers from its lineage.