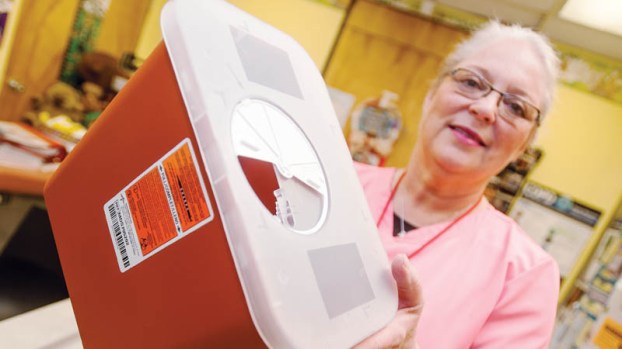 Stephanie Barnett, with the City of Ironton Health Department, displays a box used to dispose of syringes.

The Ironton City Health Department offers a free disposal service for people who use syringes to inject their medication.

“Any citizen of Ironton can come in and get a red box and then, when it gets filled with their syringes, they can bring the red box back and we get rid of it as medical waste and they can get another red box,” said Laura Brown, the director of the Ironton Health Department. “I welcome people to come and we will take care of it. It is no problem whatsoever. And it is a free service.”

Brown said the health department offers the service as a public safety measure.

Syringes have been found in city wastewater catch basins and at the wastewater plant.

They have also been found on city streets and parks.

“Or people are sticking them in really thin plastic and then the garbage people go to pick it up and they are getting stuck with the needle,” Brown said. “So we want to get it out of the garbage so our city employees don’t get hurt. And we would rather have people bring the needles here rather than throwing them out and getting in catch basins.”

All people have to do it is go to the health department at 2120 South Eighth Street and ask for a red box. Brown said they don’t ask what medications people are on.

She added that if people are putting the syringes or needles into bottles, they can bring that container in and it will be disposed of and they will be given a red box.

“As medical waste, it all goes to one place and we are happy to dispose of it,” Brown said. “It’s no cost to them, as long as they are a resident of Ironton.”